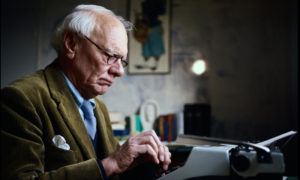 Malcolm Muggeridge was a famous English journalist born in 1903 and died in 1990, a lover of satire and of women. He lived as a declared atheist almost until his death, that is until his surprising conversion, occurred thanks to the Encyclical Humanae Vitae, of which we celebrate the fiftieth year in these days.

He said that his look towards faith was that of a gargoyle: from the top of a spire, from the top of a cathedra, he sneered at the ridiculous behaviours and the wasted efforts by the believing humankind. But in 1969 and in 1982, around the age of 80, this contemptuous observer became Catholic together with his wife Kitty. The first spur seems to have come from Saint Teresa of Calcutta.

The journalist went to India to document the activities of the Missionary Sisters of Charity and spent much time with Mother Teresa: seeing her assist the last of the last, he then defined her a “light which could never be extinguished” and narrated his experience in his book “Something Beautiful for God”, published in 1972. He wrote about her as about a “living conversion” and said that one could not observe her with the people assisted by her, without being already in some degree converted: her love for Christ and treating everyone as if they were the Lord in person had more effect on him than anything else. While being in touch with that defender of life, Muggeridge reported to have perceived the inestimable value of the Incarnation of the Son of God.

Afterwards the journalist started also the study of the writings by Saint Augustine and edited and produced a TV series for the BBC in which he analysed the thought and the works of the Bishop of Hippo, Blaise Pascal, William Blake, Søren Kierkegaard, Fyodor Dostoevsky, Leo Tolstoy, and Dietrich Bonhoeffer. He convinced himself that human life was sacred, thereby predicting the remarkable damages of contraception in the deterioration of the interpersonal relationships. Coherently with his statements, he resigned as Rector of the University of Edinburgh to protest against the students’ campaign that asked the availability of contraceptive pills at the University Health Centre. His resignation was preannounced in a sermon at the Cathdral of St. Giles, subsequently published with the title “Another King”.

On the 25th of July 1968, when Humanae Vitae was released, Muggeridge restated his personal appraisal of the Catholic Church. Ten years later, on occasion of a symposium at the University of San Francisco, he, already converted to Christianity but not yet to Catholicism, delivered this speech:

«I find myself in a most difficult position… After all, I am not a Catholic. I do not have that great satisfaction that so many Catholics enjoy. At the same time, I have a great love for the Catholic Church, and I have had from the beginning a feeling stronger than I can convey that this document Humanae Vitae, which has been so savagely criticized, sometimes by members of the Catholic Church, is of tremendous and fundamental importance, and that it will stand in history as tremendously important. And I would like to be able to express this profound admiration that I have for it; this profound sense that it touches upon an issue of the most fundamental importance and that it will be, in history, something that will be pointed to both for its dignity and for its perspecuity».

Muggeridge continued his passionate defence of Humanae Vitae until 1978. Four years later, to his colleagues’ and the media’s general surprise, he and his wife embraced the Catholic faith. In 1988 he published his last book, dedicated to life change and titled The Spiritual Journey of a Twentyeth Century Pilgrim. He died two years later, on November 1990: the monster on the top of the Cathedral had come down and finally entered the House of God.