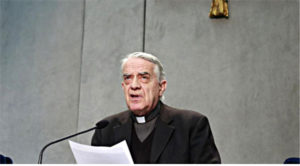 After the first attack against the Pope from his safe house, Msgr. Viganò keeps his mouth off, but he has not realised that his rifle loaded only with blanks. The last gossip of the Prelate of Varese, indeed, concerns the 2015 meeting between Pope Francis and Kim Davis, an employee convicted for having invoked the conscientious objection by refusing to sign the marriage licence of gay couples. But his reconstruction of facts was clamorously exposed by the ex spokesman of Benedict XVI and one of the closest collaborators of the Pope Emeritus: Father Federico Lombardi.

THE PREVIOUS EPISODES. Msgr. Viganò was in the public eye one week ago through a verbose dossier, well detailed but unsubstantiated, in which he asked with a great delay Pope Francis to resign, because the latter would have disregarded some alleged secret restrictions imposed by his predecessor on Card. McCarrick, accused of a past homosexual life. However, we discovered that Viganò lied: Benedict XVI himself allowed the Cardinal to disregard these restrictions, by meeting him at the Vatican and letting him attend events of other kinds (therefore, in the worst of cases, the fault would have to be ascribed to Ratzinger, unhappily involved by Viganò). The dossier has rapidly become a boomerang, since it allowed to discover that Viganò himself publicly manifested “affection” for and celebrated the Eucharist with the Cardinal he knew to be an abuser. Disappointed by the failed “impeachment” of the Pope, the ex Apostolic Nuncio reappeared admitting that, effectively, Card. MacCarrick was free to attend the audiences of the Pope Emeritus, thereby scaling down his charge against the current Pope for having allowed the alleged restrictions imposed by Ratzinger to be, as it were, disobeyed “from the time of his election”.

NEW CHARGES FROM VIGANÒ ON THE KIM DAVIS CASE. The fiction has unfortunately gone on with a new episode. Viganò told the world he had proposed to Pope Francis to meet Kim Davis during his visit to the USA in 2015 «personally and in a completely confidential way, out of the media spotlight» – he wrote. The meeting took place: «I organized to have Davis come to the nunciature without anyone noticing […]. I also had Davis promise me in advance that she would not give any news to the media until after the Pope’s return to Rome». The Pope, writes Viganò, met Davis, embraced her and thanked her for her courage, but the former Nuncio criticises the then Vatican spokesmen since, once the new had emerged, they denied that it was a private visit, by reducing it to an informal greeting. Which it was: even Viganò has written so in his intervention. The former Nuncio thus reported to have been called by the Secretary of State Parolin, because the Pope was furious with him. But, according to Viganò, the opposite occurred: «The Pope received me for almost an hour, and was very affectionate and paternal. He immediately apologized to me for troubling me with coming to Rome, and he lavished continuous praise on me for the way I had organized his visit to the USA, and for the incredible reception he received in America. He never expected such a welcome. To my great surprise, during this long meeting, the Pope did not mention even once the audience with Davis!». Few days ago, a victim of sexual abuses, Juan Carlos Cruz, recounted that some months ago, in a private meeting, Francis would have spoken to him about the Davis case by saying: «I did not know who the woman was and he [Msgr. Viganò] snuck her in to say hello to me — and of course they made a whole publicity out of it. And I was horrified and I fired that Nuncio». Who is lying – asks Viganò –, Cruz or the Pope? «It is clear, however» – concluded the former Nuncio: «that Pope Francis wanted to conceal the private audience with the first American citizen condemned and imprisoned for conscientious objection».

An inconclusive gossip, in which the charge is ridiculous: the Pope would have concealed his meeting in a private audience (far from the media) with Cruz? Even if it were true and if we took Cruz’s word sas Gospel, where is the scandal? Does Viganò want perhaps to make the Pope look like an enemy to the conscientious objection? Unfortunately for Viganò, while the Pope was coming back exactly from that journey to the USA, a question was raised, this time publicly, by a journalist about those «government officials, who say they cannot in good conscience, their personal conscience, comply with certain laws or carry out their duties as government officials, for example in issuing marriage licenses to same-sex couples», by which Davis was being evidently referred to, without being mentioned. Pope Bergoglio answered: «I can say conscientious objection is a right, and enters into every human right. It is a right, and if a person does now allow for conscientious objection, he or she is denying a right». Nothing could be clearer and more public than this!

FATHER LOMBARDI EXPOSES THE LIE. Yesterday evening, though, Father Federico Lombardi, trusted collaborator of Benedict XVI, his spokesman for many years, and President of the Ratzinger Vatican Foundation, wanted to have his say on the episode. Lombardi was quoted by Viganò himself and (together with his English-speaking assistant, Father Thomas Rosica) clamorously exposed the the ex Nuncio, by reading the notes he had taken during the meeting he had with him the evening after the famous face-to-face discussion between Viganò and Francis. On that occasion, contrary to what is reported by the ex Nuncio, the Pope really reproached him as a result of having felt deceived by him for two reasons. Firstly, because, as Apostolic Nuncio, he had not warned him about the potential mediatic impact which, for an informal greeting, risked overshadowing the real reason for the visit to the USA and, secondly, because he had hidden from him (or denied) that Davis had been married four times. Father Lombardi, indeed, read the Pope’s words Viganò himself reported to him back then: «You never told me that she had four husbands!» – complained the Pontiff.

There are 5 conclusions we can draw from the new Vatican gossip:

1) Msgr. Viganò lied again: it is not true that the Pope, when he wanted to meet him after his journey to the USA, did not reproach him for having organised the meeting with Kim Davis. Indeed, the opposite is true: he himself said it to Father Lombardi and Father Rosica.

3) Pope Francis scolded Viganò not for having made him meet Kim Davis (also because even he recounts that the Pope was himself enthusiastic about it), but because Viganò did not calculate and did not warn him about its potential mediatic impact which risked overshadowing the real reasons for the pastoral trip, and because Viganò omitted that David was a four-time divorcee and, therefore, a woman certainly courageous for his act of conscientious objection but not so credible a witness of the Christian marriage.

4) It was the ex spokesman of Benedict XVI to expose Viganò, just as the personal secretary of the Pope Emeritus, Georg Gänswein, had proved him wrong some days ago when his (Viganò’s) lawyer, Timothy Busch, spread the fake news that Ratzinger had confirmed the famous dossier. This is no coincidence, and Benedict XVI’s disdain for this episode clearly emerges.

5) Once again, Viganò’s remark has become a boomerang against himself.

Two days ago our friend Marco Tosatti complained with UCCR for defending Pope Francis and having refuted the charged made against him by Viganò, of whom he was the proofreader: «They will have their connivance. It is a real shame: it was a really interesting website. I wait for them to comment the story of Kim Davis» – he wrote. Well, we have contented him. Now it is we who are waiting for him and his other fellow of the anti-Papist resistance, Aldo Maria Valli, to bend over backwards, as usual, to defend the indefensible. However, to be honest, we pray that this ridiculous put-on made up of waned accusations, gossip, and talebearing will end. For the good of all.

Ratline: the Catholic church did not help the Nazi criminals »