Msgr. Lemaître, father of the Big Bang: he changed the mind of Albert Einstein 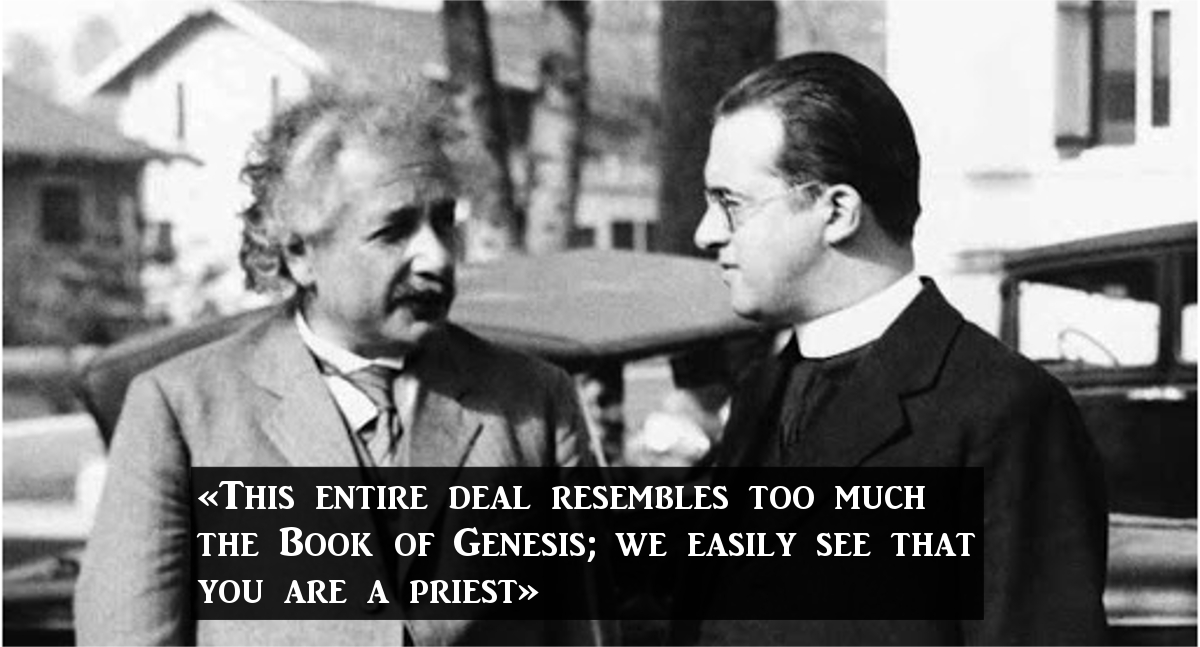 Even Google celebrated the anniversary of the birth of Msgr. Georges Lemaître (17th of July), father of the Big Bang and the one who opened the contemporary era of cosmology.

Priest and physicist of Belgian descent, he does not only represent one of the greatest scientific revolutionaries in history, he is not only a universal example of the compatibility between science and faith, but he was also the one who, with utmost humility, corrected his friend and colleague Albert Einstein. Three were the main public contacts between Lemaître and Einstein, in which the Belgian Jesuit converted the father of relativity to the theory of the birth and of the continuous expansion of the Universe.

Born in 1984 in Charleroi, young Lemaître’s precocity for science was parallel to his religious vocation, so much so that at 9 years ago he decided to become priest. He followed, however, his parents’ advice and was educated at the Jesuits’ schools. In 1922 he published a little thesis on Einstein’s physics that brought him to Cambridge University as researcher in astronomy. Almost parallelly, he was ordained priest, on September 1923, at the age of 29. He started to collaborate with famous astrophysicist Arthur Eddington and, in 1927, Lemaître anticipated (on the Annales de la société scientifique de Bruxelles) what is today known as Hubble’s Law, which concerns the speed at which galaxies separate from each other (recession of nebulae).

Let us get to the first meeting between Lemaître and Einstein. It was 1927 and all the most important physicists met at the famous Solvay Conference in Brussels. The two talked to each other long, but the German physicist, even confirming the correctness of Lemaître’s equations on relativity, pronounced sceptically about the idea of an expanding Universe by telling him: «Your calculations are correct, but your understanding of physics is abominable». He was too attached to a model of an eternal and static Universe. The Jesuit took the criticism, until 1929, when Hubble published a work that presented more evidence for the expansion of the Universe, thereby contradicting the theory commonly accepted back then. In 1931 the Belgian Jesuit answered the objections in a document on Nature: «The beginning of the Universe» – he concluded: «happened short before the beginning of space and time». It was the first explicit formulation of the theory of the “primordial atom”, which would be backed by always more confirmations and became accepted by the majority of scientists. Some remained against it: the Soviets, in particular, considered this “relativistic cosmology” a disguised theology, too allied with religion, a new edition of the «old clerical theory of the Universe that moves in only one direction (from the beginning to the end)». Even English Astronomer Fred Hoyle manifested his dissent and pejoratively defined the theory of the Belgian priest as “Big Bang”.

Lemaître became a celebrity and during one of his many conferences, in California, his friend Albert Einstein went to listen to him. We are 1932 in Pasadena; it was the second meeting between the two. They strolled for hours while talking about physics and the ascent of Adolf Hitler. For the first time, Einstein admitted the expansion of the Universe but did not quite accept the hypothesis of the “primitive atom”, because he suspected that the Jesuit priest was not scientifically objective. The German physicist judged this hypothesis as «inspired by the Christian dogma of creation and unjustified at the scientific level». So much so as to tell famously his friend and colleague: «This entire deal resembles too much the Book of Genesis; we easily see that you are a priest».

The third and last meeting between Einstein and Lemaître took place the following year, in 1933. After Lemaître concluded his speech at the Mount Wilson Observatory in California, Einstein stood up and, applauding, said: «This is the most beautiful and satisfactory explanation of creation that I have ever heard». As a matter of fact, there probably were other contacts between the two scientists, related, though, to dramatic historical facts: after the rise of Nazism, Einstein renounced the German citizenship, and Lemaître, to help him, organised in Brussels a series of conferences animated by the father of relativity. In his turn, Einstein would reciprocate this human and scientific esteem by even supporting Jesuit priest’s candidacy to the important Francqui Prize, effectively awarded to Lemaître in 1934 (F. Agnoli, Filosofia, religione e politica in Albert Eintein, ESD 2015, p. 35).

Lemaître was assigned many tasks at the Pontifical Academy of Sciences, thereby becoming the personal consultant of Pope Pius XII (who expressed his “favourableness” for the idea of a dynamic Universe and the Big Bang on 22/11/1951), and also became the President of the said Academy in 1960. He died in 1966, at the age of 71, two years after the news of the discovery of the cosmic microwave background radiation, the last decisive proof of the correctness of his astronomical theory. «The believer» – he wrote: «has the advantage of knowing that the enigma has a solution, that the underlying logic is ultimately the work of an intelligent being, that, therefore, the problem posed by nature was posed to be solved, and that its difficulty is probably proportionate to our human abilities, be it today or tomorrow. This knowledge might not provide him with new investigation resources, but it will help him maintain the healthy optimism without which a sustained effort cannot long endure» (quoted in O. Godart & M. Heller, Les relations entre la science et la foi chez Georges Lemaitre, Pontificiae Academiae Scentiarum Commentarium, vol. III, n. 21, p.21).

« «The churches’ bells are most beautiful». Dawkins surprises again

When the progressivist priest Panikkar asked for forgiveness »