«The churches’ bells are most beautiful». Dawkins surprises again 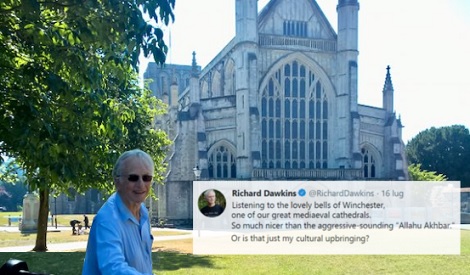 «Listening to the lovely bells of Winchester, one of our great mediaeval cathedrals». This was the tweet from the most famous fundamentalist atheist in the world, Richard Dawkins, author of The God Delusion. He fought for years to annihilate the “virus of religion”, but today, somewhat older, he sits on a bench while admiring the Winchester Cathedral. Who would have said it?

Dawkins, after ascertaining to «have failed» – as he had already admitted in 2008 – is maturing a reconsideration of his position. The topics concerning the inexistence of the Creator have left room for the more political ones (anti-Trump, anti-Brexit etc.), and always more frequently he is showing worried about the advance of Islam across Europe, so as to rediscover himself by reaction «culturally Christian», as he defined himself in 2013.

In the recent tweet we are commenting, indeed, he added: «[Bells are] so much nicer than the aggressive-sounding “Allahu Akhbar.” Or is that just my cultural upbringing?». After having been covered with criticisms and insults (those he never received when he acted as a hater of Christians), he clarified: «Church bells are beautiful. The muezzin’s call to prayer can also bhe very beautiful if recited in a good voice. But also, “Allahu Akhbar” is the last thing you want to hear before the suicide bomb goes off». And again other accusations of Islamophobia. As wrote Giulio Meotti: «The atheist is always fine when he attacks Joseph Ratzinger, Saint Augustine, and the dusty Judeo-Christian tools. But if he touches Islam, it is a whole other story».

One month ago, we were commenting precisely this revaluation of Christianity on the part the atheist evolutionist (or, better, agnostic, as he wanted to define himself), by observing how Dawkins is not curiously choosing and proposing a hard, rationalistic, and positivistic atheism as “the bastion” of society against Islamism, as he would have done until few years ago. Not at all. He opted to rehabilitate Christianity, which was absolutely not to be taken for granted.

In this way, the last thing was to appreciate the «most beautiful» bells of the Christian churches, by having himself photographed just a few meters from Winchester Cathedral. Who knows whether in a few months he will decide to cross its threshold and take a look at the inside…

« How not to lose faith? How to transform it from feeling to certainty?

Msgr. Lemaître, father of the Big Bang: he changed the mind of Albert Einstein »