Paul VI vetoed the pill. The commendation from Bergoglio: «He was a courageous prophet!» 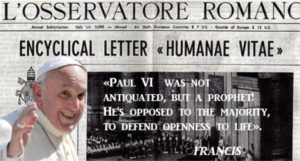 «I think about Blessed Paul VI. He had the strength to defend openness to life inside the family at a time when many people were worried about population growth. He was not antiquated, close-minded. No, he was a prophet, No, he was a prophet who, with this, told us to beware of Neo-Malthusianism, which is coming». It is a pity that nobody is remembering these clear judgments of Pope Francis on the Pope of Humanae Vitae, the Encyclical that – among other things, because it must not be reduced to that – restated the rejection of chemical contraception by the Church.

It is an issue having become again topical thanks to the study of Msgr. Gilfredo Marengo, Professor at the Pontifical Theological Institute John Paul II and author of the book, The Birth of an Encyclical: ‘Humanae Vitae’ in the Light of the Vatican Archives (Libreria Editrice Vaticana 2018). It emerged that Paul VI, on October 1967, asked for the opinions of the Synodal Fathers on contraception in view of the publication of the encyclical: Only 26 of the 200 bishops present produced a written response. The majority of them said they were in favour of some opening to the pill, while 7 were against. However, the despite the favourable opinion of the Bishops and of the consulted theologians, Montini considered it inappropriate to change the position of his predecessors and promulgated the famous encyclical (albeit without the charism of infallibility).

Amongst the seven dissenting Bishops, there was also Krakow’s, Karol Wojtyla, future John Paul II, through the so-called Memorial of Krakow. Many exponents of the Church who took a favourable view of the admissibility of the pill, instead, considered it a «means by which the aim to avoid a new conception was reached while respecting the needs of conjugal love and the dignity of the spouse» – writes Msgr. Marengo. But Montini «did not judge this thesis acceptable», above-all because the diffusion of chemical contraception had already paved the way for «disquieting anti-natalist policies in many parts of the world, especially the poorer and the underdeveloped». The fact that the worry about antinatalist policies was crucial in the decision was also reminded by Pope Francis, who (of course not for this reason!) has wanted to canonise Paul VI.

Nevertheless, the anti-papist galaxy believed the fake news by journalist Marco Tosatti – which Roberto De Mattei of Corrispondenza Romana immediately believed, accusing the Pope of being willing to destroy also (beside what?) Humanae Vitae –, who wrote that «at the Vatican reliable indiscretions reveal that the Pontiff would have been about to nominate – or would have even already nominated – a secret commission to examine and possibly study modifications of the position of the Church on contraception, as fixed in 1968 by Paul VI in the encyclical Humanae Vitae». That Tosatti’s sources do not exist or are, anyway, made-up has been demonstrated by Prof. Marengo, who indirectly answered these inexplicable and continuous fake-news against the Church: «Humanae Vitae is an authoritative document of the pontifical Magisterium that we are called to welcome, through an intelligent pastoral exercise. There is no need to update Humanae Vitae».

Indeed, on several occasions, Francis – unlike Card. Carlo Maria Martini, for example – praised the courage of Paul VI to take this decision: «Paul VI’s rejection» – declared he, for example, in 2015: «was watching the universal Neo-Malthusianism that was in progress». In 2014, instead, Bergoglio commented: «His genius was prophetic: he had the courage to stand against the majority, to defend moral discipline, to exercise a cultural ‘brake,’ to oppose present and future neo-Malthusianism». And again: «He knew the difficulties that are there in every family, and so in his Encyclical he was very merciful towards particular cases, and he asked confessors to be very merciful and understanding in dealing with particular cases. But he also had a broader vision: he looked at the peoples of the earth and he saw this threat of families being destroyed for lack of children. Paul VI was courageous; he was a good pastor and he warned his flock of the wolves who were coming. From his place in heaven, may he bless this evening!».

Thus Francis recalls Paul VI’s justified fears about contraception – albeit inside the family – as an obstacle to the welcoming of the gift of life and to making a total gift of oneself in the sexual act; obstacle allied with the birth rate fall. In a historical period in which almost everybody believed in the unreal demographic bomb, now we know how it tragically went, and today it is up to the Italian Chicco’s spot to remind us of the demographic winter and of the urgent necessity to give birth to children.

On those occasions, Francis also observed that the Church, despite opposing contraception, has never promoted an “unlimited fecundation”, a sexuality related only to conception. Recalling the words of John Paul II against “unfettered fecundity”, Pope Bergoglio, indeed, mentioned «many, many licit escapes that helped with this». That is to say the natural methods for the regulation of fertility, which the Catholic Church teaches to use (in premarital courses, for instance) as effective alternatives and in harmony with the openness to life and with the total gift of oneself to the other. The Church does not limit herself to say no, but always proposes a number of yes to alternatives that she deems more respectful of human dignity.

« Protestantism collapses in the USA: the mistake of conforming to the world