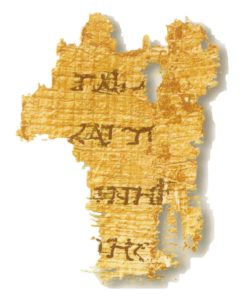 One year ago, the Hebrew University of Jerusalem signaled the discovery of 12th Qumran cave, that would host the fame texts of Dead Sea, including the oldest manuscripts of the Bible. Among them also the fragment called 7Q5, what could be connected to Mark’s Gospel.

The Qumran caves are considered the greates archaelogical discovery of 20° century, they emerged by chance in 1947 from a cave about a mile from the Dead sea’s west coast. The going assumption is that they were hidden from Essenes community.

The discovery is even more fascinating if one consider the famous fragment of papyrus called 7Q5, which is the 5th manuscript found in 7th Qumran cave. About it has been unleashed a international debate between papyrologists and Bible scholars, when in in 1972 the leading scholar José O’ Callaghan has identified the text on 7Q5 as a piece of Mark’s Gospel: 6:52-53, to be exact. The definitive draft of this Gospel is commonly dated at 70 A.D., however if O’Callaghan’s right should be backdate this at around 50 A.D. (about 20 years after Jesus’s death), because all the archaelogical research exclude that the Qumran site was inhabited or used after 68 A.D.

In the ’90s, two italian catholic weekly –Il Sabato and 30 giorni– monitored the development of debate, and their articles on “Qumran case” are including in a book called Vangelo e storicità (BUR 1995), by italian theologian Stefano Alberto.

In support of theory of spanish papyrologist O’ Callaghan intervened his german colleague Carsten Peter Thiede, that independently confirmed identification of 7Q5 as a part of a roll containing Mark’s Gospel. Moreover, Thiede claimed that other fragment, the 7Q4, must be attributed to First letter of Paul to Timothy (the same was said of prof. Emile Puech, one of five leaders that oversaw the Qumran’s works).

Many scholars, however, objected to this conclusions, citing many reasons, on which O’Calaghan answered. The critics were Bruce Metzger, father Joseph Fitzmyer, Julio Trebolle, father Pierre Grelot, from Institut Catholique of Paris, Émile Puech (whom Carsten Peter Thiede answered) and Gianfranco Ravasi, member to Pontifical Biblical Commission. They’re all bible scholars, not papyrologists. Someone also launched incredibile personal attacks against O’ Callaghan and Thiede, going out to field of science. Paolo Sacchi, professor of Hebrew and Aramaic at Turin University, said: «About dating of Gospel happen shocking facts. Certain scientific criteria that are used for other texts, no longer apply with New Testament» (p. 254).

The leading papyrologists turned with O’Callaghan, as said in 1994 the famed jesuit and bible scholar Ignace de la Potterie: «The papyrologists have showed unanimously agreed: that text, than anything is about, couldn’t have been written after the year 50 A.D.». About the few legible letters of fragment, computer searches have provided «obsessively only one answer: that piece belong to Mark’s Gospel» (I. de la Potteire, E’ una scoperta inattesa, 30 giorni july-august 1994, quoted in Vangelo e storicità, p. 217-219). The bible scholar referring to x-ray exam carried out on 7Q5 in 1992, by National Police Department of Israel, which confirmed the conformity of the text with Mark’s Gospel passage. A informational exam was carried out also by Protestant theologian Kurt Aland, one of those who opponents of O’Callaghan, and it have been negative. However the prof. Ferdinand Rohrhirsch from Eichstätt University proved that Aland just used a wrong program (it was a real stomach punch, in fact the theologian didn’t show-up at Symposium in 1991). Finally, the mathematician Albert Dou, professor at Madrid University and member of Real Academy of Sciences, proved that the possibility of 7Q5 doesn’t match to the verse 52-53 of 6th chapter to Mark’s Gospel, is 1 in 900 billion.

In support of this identification came a international luminary of papyrology, Orsolina Montevecchi, professor emeritus at Catholic University of Milan and president of International Association of Papyrologists. In a interview in 1994, she said: «as papyrologist I can say that I consider undoubtedly right this identification. The still visible five lines of fragment correspond to Mark 6:52-53. It is highly improbable the match with a other text» (in Ricerchiamo senza pregiudizi, in “30 giorni” july-august 1994, quoted in Vangelo e storicità, p. 211-214). Sergio Davis, honorary president to International Association of Papyrologists and Giuseppe Ghiberti, president of Italian Biblical Association were of the same opinion. Also many Protestant scholars were in favor of the Mark’s Gospel identification, as lutheran Otto Betz, emeritus of History of Judaism and New Testament at Tubinga University, and Rainer Riesner, professor of New Testament in the same university. From Jewish world was important the voice of prof. Shemaryahu Talmon, Bible scholar at Hebrew university of Jerusalem and a Jewish member of dating to Dead Sea scrolls.

The ranks of supporters grew during and after the Eichstatt University Qumran Symposium in 1991. On this occasion, unfortunately, the opponents of O’ Callaghan’s theory didn’t show-up even thought they were invited. During this event given a favourable judgement also prof. Bargil Pixner, benedictine authority on the Dead Sea Scrolls, prof. Bernhard Mayer, theologian at Eichstätt University, the Bible scholaras Benedikt Schwank and Luis Alonso Schökel, and the eminent professor of New Testament at Princeton University, James Charlesworth. The papyrology Herbert Hunger, professor emeritus of Byzantinism at Vienna University and director at Department of Papyri of the Austrian National Library, claimed: «I’m not religious and I’m not a Bible scholar. I am a scientist and as scientist say that from the closely papyrological point of view there’s no question: O’Callaghan is right».

The proof of papyrology O’Callaghan joined with that to liberal scholar J.A.T. Robinson, who, before O’Challaghan, proposed to backdate all texts of New Testament before to 70 A.D. The same proposed came from eminent Bible scholar Günther Zuntz and from palaeographer Colin H. Roberts, who have dated Mark’s Gospel between 50 B.C. and 50 A.D.

Assignement to 7Q5 of Mark’s Gospel is important but not fundamental as concerns historicity of evangelical writings, which preserve their historical reliability also if wouln’t have been written before 70 A.D. In fact, we should consider the pre-synoptic and oral sources, that have developed right after the death of Christ (and, according to some scholars, also during His life). Like papyrology Orsolina Montevecchi said, «there’s nothing to defend: also if the Qumran fragment there is not a Mark’s Gospel, the christianity doesn’t lose anything. However, from textual and palaeographic point of view, that’s my specialty, is virtually impossible that it may be other text, maybe unknow. There’re well five lines of text on which we can build! So, this fragment of Mark’s Gospel is datable 20 years after the Jesus death» (p. 211-214).

A comment to Early date of Mark’s Gospel: what Dead Sea Scrolls say?

« 9600 Jews were protected at the Vatican

«The stars? They refer to man’s destiny», says famous astrophysicist »