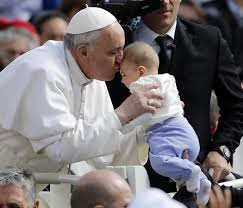 In a recent interview on “La Civiltà Cattolica” Pope Francis has talked about the so-called “non-negotiable values​” urging Catholics to always focus on the evangelical message, “the Lord has saved you” and not on the condemnation for those who violate and betray them. Many have misunderstood this statement as a form of relativism, but the Pope is simply applying the centuries-old position of the Church: mercy towards the sinner and condemnation of sin.

Indeed, when it is necessary to condemn abortion he does not back down, using even stronger words than its predecessors’ ones: “A widespread mentality of the useful, the “culture of waste” that today enslaves the hearts and minds of so many, comes at a very high cost: it asks for the elimination of human beings, especially if they are physically or socially weaker. Our response to this mentality is a decisive and unreserved “yes” to life”, as he said during the meeting sponsored by the International Federation of Catholic Medical Associations on September 20th.

“Every child who, rather than being born, is condemned unjustly to being aborted, bears the face of Jesus Christ, bears the face of the Lord, who even before he was born, and then just after birth, experienced the world’s rejection“. “They cannot be discarded, as the “culture of waste” suggests! They cannot be thrown away!” – he urged. “That is why concern for human life in its totality has become in recent years a real priority for the Church’s Magisterium, especially for the most defenseless; i.e., the disabled, the sick, the newborn, children, the elderly, those whose lives are most defenseless“.

There is a paradoxical situation, he said, in which”while persons are being accorded new rights — at times even presumed rights — life itself is not always protected as a primary value and primordial right of every human being. The final aim of the doctor’s action is always the defence and promotion of life“. Therefore you must have a “commitment consistent with your Christian vocation; and then to contemporary culture, by contributing to recognizing the transcendent dimension of human life, the imprint of God’s creative work, from the first moment of its conception. This is a task of the new evangelization that often requires going against the tide and paying for it personally. The Lord is also counting on you to spread the “gospel of life”“.

The Church’s position, said Francis, is based on science, not just on faith. So he invited Catholic gynaecologists to take care of human life “in its initial stage; remind everyone, by word and deed, that this is sacred — at each phase and at every age — that it is always valuable. And not as a matter of faith — no, no — but of reason, as a matter of science! There is no human life more sacred than another, just as there is no human life qualitatively more significant than another. The credibility of a healthcare system is not measured solely by efficiency, but above all by the attention and love given to the person, whose life is always sacred and inviolable“.

For this reasons, “the Church makes an appeal to consciences, to the consciences of all healthcare professionals and volunteers, and especially to you gynaecologists, who are called to assist in the birth of new human lives“.

The Editorial staff, translated by Vito

Pope Francis’ judgment: “the family is between man and woman” »