The Galileo case: the philosopher of science Feyerabend defended the position of the Church 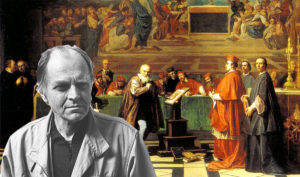 Galileo, Bellarmine, and the Church. The most ancient version of the “Letter to Benedetto Castelli” by Galilei was found in London. We exploit this occasion to publish a reflection by philosopher Feyerabend, whose quotation meant the censorship of Benedict XVI by some professors of the Sapienza University in 2008. Paul Feyerabend was professor at the main European universities as well as at the California University. His approach, as can be deduced, is absolutely secular.

By Paul Feyerabend*
* Philosopher of science

The Church at the time of Galileo not only kept closer to reason as defined then and, in part, even now: it also considered the ethical and social consequences of Galileo’s views. Its indictment of Galileo was rational and only opportunism and a lack of perspective can demand a revision. […]

The trial of Galileo was one of many trials. It had no special features except perhaps that Galileo was treated rather mildly, despite his lies and attempts at deception. But a small clique of intellectuals aided by scandal-hungry writers succeeded in blowing it up to enormous dimensions so that what was basically an altercation between an expert and an institution defending a wider view of things now looks almost like a battle between heaven and hell. The so-called trial of Galileo consisted of two separate proceedings, or trials. The first occurred in 1616. The Copernican doctrine was examined and criticized. Galileo received an order, but he was not punished. The second trial took place in 1632/33. Here the Copernican doctrine was no longer the point at issue. Rather, what was considered was the question of whether Galileo had obeyed the order given him in the first trial, or whether he had deceived the inquisitors into believing that the order had never been issued. The proceedings of both trials were published by Antonio Favaro in Vol. 19 of the National Edition of Galilean material. The suggestion, rather popular in the 19th century, that the proceedings contained falsified documents and that the second trial was therefore a farce, seems no longer acceptable.

On the second point, the social (ethical) implications, the experts declared the Copernican doctrine to be “formally heretical”. This means it contradicted Holy Scripture as interpreted by the Church, and it did so in full awareness of the situation, not inadvertently (that would be “material” heresy). The second point rests on a series of assumptions, among them the assumption that Scripture is an important boundary condition of human existence and, therefore, of research. The assumption was shared by all great scientists, Copernicus, Kepler and Newton among them. According to Newton knowledge flows from two sources – the word of God – the Bible – and the works of God – Nature; and he postulated divine interventions in the planetary system, as we have seen.

The Roman Church in addition claimed to possess the exclusive rights of exploring, interpreting and applying Holy Scripture. Lay people, according to the teaching of the Church, had neither the knowledge nor the authority to tamper with Scripture and they were forbidden to do so. This comment, whose rigidity was a result of the new Tridentine Spirit, should not surprise anyone familiar with the habits of powerful institutions. The attitude of the American Medical Association towards lay practitioners is as rigid as the attitude of the Church was towards lay interpreters – and it has the blessing of the law. Experts, or ignoramuses having acquired the formal insignia of expertise, always tried and often succeeded in securing for themselves exclusive rights in special domains. Any criticism of the rigidity of the Roman Church applies also to its modern scientific and science-connected successors.

Turning now from the form and the administrative backing of the objection to its content we notice that it deals with a subject that is gaining increasing importance in our own times – the quality of human existence. Heresy, defined in a wide sense, meant a deviation from actions, attitudes and ideas that guarantee a well-rounded and sanctified life. Such a deviation might be, and occasionally was, encouraged by scientific research. Hence, it became necessary to examine the heretical implications of scientific developments. Two ideas are contained in this attitude. First, it is assumed that the quality of life can be defined independently of science, that it may clash with demands which scientists regard as natural ingredients of their activity, and that science must be changed accordingly. Secondly, it is assumed that Holy Scripture as interpreted by the Holy Roman Church adumbrates a correct account of a well-rounded and sanctified life. The second assumption can be rejected without denying that the Bible is vastly richer in lessons for humanity than anything that might ever come out of the sciences. Scientific results and the scientific ethos (if there is such a thing) are simply too thin a foundation for a life worth living. Many scientists agree with this judgement. They agree that the quality of life can be defined independently of science – which is the first part of the first assumption. At the time of Galileo there existed an institution – the Roman Church – watching over this quality in its own particular way. We must conclude that the second point – Copernicus being “formally heretical” – was connected with ideas that are urgently needed today.

The Church was on the right track. But was it perhaps mistaken in rejecting scientific opinions inconsistent with its idea of a Good Life? I argued that knowledge needs a plurality of ideas, that well-established theories are never strong enough to terminate the existence of alternative approaches, and that a defence of such alternatives, being almost the only way of discovering the errors of highly respected and comprehensive points of view, is required even by a narrow philosophy such as empiricism. Now if it should turn out that it is also required on ethical grounds, then we have two reasons instead of one rather than a conflict with “science”.

Besides, the Church, and by this I mean its most outstanding spokesmen, was much more modest than that. It did not say: what contradicts the Bible as interpreted by us must go, no matter how strong the scientific reasons in its favour. A truth supported by scientific reasoning was not pushed aside. It was used to revise the interpretation of Bible passages apparently inconsistent with it. There are many Bible passages which seem to suggest a flat earth. Yet Church doctrine accepted the spherical earth as a matter of course. On the other hand the Church was not ready to change just because somebody had produced some vague guesses. It wanted proof — scientific proof in scientific matters. Here it acted no differently from modern scientific institutions: universities, schools and even research institutes in various countries usually wait a long time before they incorporate new ideas into their curricula. (Professor Stanley Goldberg has described the situation in the case of the special theory of relativity.) But there was as yet no convincing proof of the Copernican doctrine. Hence Galileo was advised to teach Copernicus as a hypothesis; he was forbidden to teach it as a truth. This distinction has survived until today. But while the Church was prepared to admit that some theories might be true and even that Copernicus’ might be true, given sufficient evidence, there are now many scientists, especially in high energy physics, who view all theories as instruments of prediction and reject truth-talk as being metaphysical and speculative. Their reason is that the devices they use are so obviously designed for calculating purposes and that theoretical approaches so clearly depend on considerations of elegance and easy applicability that the generalization seems to make good sense. Besides, the formal properties of “approximations” often differ from those of the basic principles, many theories are first steps towards a new point of view which at some future time may yield them as approximations and a direct inference from theory to reality is therefore rather naive.

All this was known to 16th- and 17th-century scientists. Only a few astronomers thought of deferents and epicycles as real roads in the sky; most regarded them as roads on paper which might aid calculation but which had no counterpart in reality. The Copernican point of view was widely interpreted in the same way – as an interesting, novel and rather efficient model. The Church requested, both for scientific and for ethical reasons, that Galileo accept this interpretation. Considering the difficulties the model faced when regarded as a description of reality, we must admit that “[l]ogic was on the side of … Bellarmine and not on the side of Galileo,” as the historian of science and physical chemist Pierre Duhem wrote in an interesting essay.

To sum up: the judgement of the Church experts was scientifically correct and had the right social intention, viz. to protect people from the machinations of specialists. It wanted to protect people from being corrupted by a narrow ideology that might work in restricted domains but was incapable of sustaining a harmonious life. A revision of the judgement might win the Church some friends among scientists but would severely impair its function as a preserver of important human and superhuman values.

Drawn from Against the Method. Outline of an Anarchistic Theory of Knowledge

« “Jesus did not want to found a new religion”: how to answer?

Vatican-China: “clandestine” Bishop Wei Fu: «we are joyful about the agreement» »