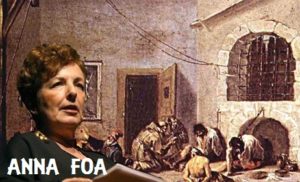 «The image of the Roman Inquisition as a reign of torture and of evil has taken on a life of its own by now, ending up resembling those fake news about which many people talk today». Thus the Jewish historian Anna Foa, Professor of Modern History at the Sapienza University of Rome. Another specialist against the black legend, that is a false anti-Catholic vulgate created by Enlightenment thinkers and Protestants.

The mediatic mainstream, reflected Anna Foa, has erroneously thought that, with the opening of the central archives of the ex Holy Office in 1998, the Catholic Church would have finally recognised the allegedly abominable and bloody nature of the Inquisition, which still represents in the collective imagination «the armed wing of the Church against heresy, free thought, freedom of conscience. To the eyes of the media and of the so-called historiographical common sense, the Inquisition was the enemy par excellence of the modern thought».

None of all this, obviously. A disappointment for journalists and anticlericals, of course not for specialists. Also because, continued the Jewish historian: «during the two last decade there had already been a historiographical revisitation in this field, which, nevertheless, evolved, rather than in the direction of a plea for forgiveness, in the direction of a revision of the so-called black image of the Inquisition, through studies that, above-all concerning the Inquisition, had rather questioned the number of its victims and its role in the persecution». Even recently, in defence of the Inquisition, historical volumes have been published, although completely ignored by the main newspapers (except for Paolo Mieli, on italian newspaper Il Corriere). Amongst those in the Italian language, as we reported on UCCR: Storia dell’Inquisizione in Italia. Tribunali, eretici, censura (Carocci 2013) by Christopher Black, historian at the University of Glasgow; Tribunali della coscienza. Inquisitori, confessori e missionari by the lay historian Adriano Prosperi, from the Scuola Normale of Pisa; Caccia alle streghe by the historian Marina Montesano, from the University of Genova; L’Inquisizione in Italia, by Andrea Del Col, from the University of Trieste; L’inquisizione: atti del simposio internazionale, by historian Agostino Borromeo.

Unfortunately, regretted Anna Foa, nor the opening of the archives nor the contribution of these historians has contributed to make the truth become part of «the common knowledge and not even of the divulgative activity of the media, more directed to sensationalism than to the accuracy of the data. In this way, the gap between the scientific studies and the common knowledge increased, and very little of the most recent discoveries by historiography has ended up becoming part of the diffused image of the terrible tribunal of the Inquisition. It suffices to surf the Web, to read the titles of the last books released, in order to realise that. The phenomenon appears even more macroscopic if one analyses the vulgate of certain particularly hot topics about the Inquistion, like the witch hunt, the trial of Giordano Bruno, Galilei’s abjuration. The gap between the rational thought – result of reflections, historical approaches, of documentary analysis – and the mythological one is insormountable».

So, concluded with little hope the Jewish historian: «people write and claim that the Inquisition caused millions of deaths for witchcraft with the same arrogance with which they claim that vaccins cause autism. But did we really hope that the opening of the archives, the increase in the materials available to historians, their specialistic knowledge, their distinctions could impinge on the world reign of myth, of non-knowledge, of prejudice? But why should it have gone that way? The last twenty years, which are those passed since the opening of the archives, are also those that saw the growth of the mythological factory in the whole society, the affirmation of instruments more useful for its consolidation than paper and than images too, the breaking down of the barriers between true and false, between knowledge and non-knowledge, between reality and fiction. Passions and prejudices prevail over knowledge and wisdom. They scream louder. No archive – we should know it; we should have learnt it from the past centuries – can have the upper hand over them, no document can refute a consolidated prejudice, undermine a stereotype».

On our part, we are not as pessimistic as Anna Foa: the – even few – people who are really interested have in fact always more informational instruments to access what specialists have known since some time. The very fact that a historian with her likes, belonging to another religion (Judaism), has perceived the ignorance and the rampant bad faith on these topics is a good reason to have good hopes for the future.

The initial explosion of Christianity: how to explain it? The book by Barth D. Ehrman »