Argentina rejects abortion: historic vote thanks to women and to the Church 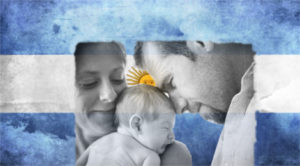 What did not happen in Italy on the 22th May 1978 e in Ireland on the 25th May 2018, happened yesterday in Argentina. The legalisation of abortion has been historically rejected by 38 deputees against 31, by preferring to save “both lives” – according to the Argentinian pro-life slogans – the mother’s and the child’s. The militancy for the “no” side by the Episcopal conference, guided by Bishops close to Argentinian Pope Bergoglio and personally chosen by him, was pretty influential.

It was a defeat for the powerful mediatic apparatus which literally censored thousands of pro-life demonstrators characterised by the colour “light blue”: on the newspaper’s page there are only and exclusively pictures of “green” flags, the pro-abortion ones (and also in these first minutes after the vote, the foreign newspapers – in Italy almost nobody has reported this news yet – choose pictures of “green” sad and disconsolate demonstrators while ignoring the exulting “light blue sea”). An example amongst all the other ones: although a survey had reported that the majority of the Argentinian women was sided against abortion, but Italian newspaper La Stampa was giving information about the event by recounting the women’s battle for legal abortion and by giving visibility only to the “green sea”.

It is a victory for those who do not believe that history is irreversible. The fact that Ireland surrendered does not mean that the battle for the right to life is compromised. El Salvador has recently rejected the bill on the interruption of pregnancy, thereby frustrating the pressures by the New York Times e Amnesty International –, and the same was done by Argentina.

Day before yesterday we were reporting how much the Church put herself out till the end, as was reminded by Clarin, the main newspaper of Buenos Aires. Even l’Osservatore Romano and Vatican News followed the debate in these months and highlighted the mobilisation in defence of life and “in favour of the discarded”. Bergoglian language, clearly, as the Pope was, though, a protagonist. Firstly, because the Bishops organised marches and celebrations, asked for the intercession of the Virgin of Luján – patron of the Argentinian people –, animated Catholics, Protestants, and non-Catholics with many quotes of Pope Francis on abortion as tragedy and «not as a right» (according to the words of Bishop Oscar Ojea). Secondly, because the most active pastors were Víctor Manuel Fernández, Archbishop of La Plata and personal collaborator of Pope Bergoglio, and card. Mario Poli, Archbishop of Buenos Aires, who kept the anti-abortion deputees united, Poli was chosen by Francis as his successor in the Archdiocesis of the Argentinian Capital, where he celebrated a Mass “for life”.

The Episcopal Conference managed to mobilise many votes of the the left wing and of the feminists. The intervention that will be remembered the longest will be the one of deputee Luis Gustavo Contigiani, member of the Frente Progresista Cívico y Social, who, aware of the incidence of his words, announced – with passion and emotion – his support to life. As a convinced socialist, he stated that «there is no more revolutionary act than to defend life and social justice for the homeland. I cannot dissociate my fight for social justice, for the development of our country, for the weaker, for the equality of opportunities from the one for the right to life of who is in his mother’s womb and has the same right to live as his mother. We do justice in the economic field; I am the first to defend work, to defend the poor, but in the field of life we are privatists: we surrender to the market; there is no more public interest, nobody that defends anyone. I desire to be coherent, Mr. President!». And there was coherence.

« Luther’s homeland is more Catholic than Protestant. The crisis of the Reformed denominations.

Einstein, God, and religion: what he thought and what he believed »