Ratline: the Catholic church did not help the Nazi criminals 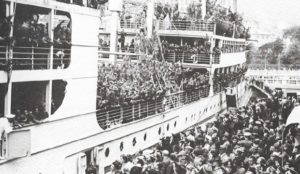 The city of Genoa (Italy) had an important role after the dissolution of the Nazi regime. From Genoa, in fact, dozens of Jews and refugees boarded to looke for a new life. However, also many Nazi criminals did; for this reason, we also talk also about ratline.

Like for every historical episode, accusations against the Catholic Church cannot fail to be levelled. In this case, she is accused of facilitating the escape also of Nazi criminals through the so-called ratline, which connected Europe with South America. This controversy has recently arisen again when Italian writer Carlo Martigli rhetorically asked Cardinal Tarcisio Bertone clarifications about all this. In particular, about Cardinal Giuseppe Siri, suspected to have supported Croatian priest Carlo Dragutin Petranovic, former army chaplain of the Ustashe militia, suspected, in his turn, to have distributed fake passports to Nazis.

Maybe Martigli does not know it, but a historical inquiry has already been written by Pier Luigi Guiducci, Professor of History of the Church at Pontifical Lateran University. In his book Oltre la leggenda nera (Mursia 2015) – which we reviewed on may 2016 – the historian devoted a whole chapter on the Genoese question (pp. 172-196). He used as sources his colleague’s contributions (Bricarelli, Brizzolari, Lai, Macciò, Scavo, Sorani etc.); the documents of Boetto, Repetto, Siri, Teglio e Valobra; the testimony found in the Croatian archives; the autobiography of former Nazi officer Priebke; and much else. Dr. Guiducci described the years after the collapse of the German regime as «the chaos at the Italian borders, because most refugees did not have documents and they could not prove their identity».

Martigli and other accusers do not even remember the great assistance from the Curia of Genoa to the Jews on the run. As early as in 1943, writes Guiducci, «many Ligurian parsons were the first to host the Jews and try to help them». Fr. Raimondo Viale, for example, «thanks to the help from the dioceses of Turin and Genoa, saved many Jews» and for this in 2000 he was awarded the title of “Righteous Among The Nations”. Beside him, there is also Cardinal Pietro Boetto – in his turn rewarded by Israel – who allied with the Delegation for the Assistance of Jewish Emigrants (DELASEM) and hid its president, Lelio Vittorio Valorba, and many Jews in religious houses and produced fake documents, also thanks to Fr. Francesco Repetto (secretary of Boetto), Fr. Bruno Venturelli and dozens of Genoese priests, so as to form a «chain of solidarity». Help also came frome people of Genoa, victims of the 1941 bombing: in 1945 Msgr. Giuseppe Siri reached the partisans in Rocchetta Vara (La Spezia), convincing them to let the food aids pass, as they thought they were destined to the Nazi-fascists. He convinced them, so the foodstuffs arrived in Genoa and were distribuited to the population.

The successor of Boetto was exactly Cardinal Siri, who founded the institution Auxilium to support the Genoese families in difficulty, and he intensified «the undeground help to the Jews persecuted by the Nazi-fascists». However, Cardinal Siri also asked for lawful trials for former Fascists and opposed summary executions. It was a delicate situation because – writes the Italian historian – it was known that «war criminals under a fake name were mixed among the refugees. About it, nor the Italian authority, nor the Red Cross, nor the Argentinian delegation, nor the Allied displayed any particular strictness in terms of boardings. So, in this chaotic crowding and through the market of false identities, the Nazi and Croatian criminals of war managed to get lost in Genoa. In many cases, it was not even about counterfeiting documents, but about receiving new ones from the Red Cross, by just saying to have lost the old one and by using friends or complaisant comrades».

It is in this context that some people accused Msgr. Giuseppe Siri of having protected these war criminals. He was accused, especially, on account of his interaction with Croatian priest Petranovic. Fr. Siri denied the charges, as quoted by Benny Lai in Il Papa non eletto. Giuseppe Siri, cardinale di Santa Romana Chiesa (Laterza 1993), and so also did his vicar Giovanni Cicali: «How is it possibile say a such lie? Fr. Siri was certainly a proud anti-Nazi, persecuted for this reason», he said in 2003. «He was the star pupil of Cardinal Minoretti, sworn enemy of Mussolini, who did not come to Genoa until the election of Cardinal Boetto, because he [Mussolini] knew that Boetto’s predecessor was anti-Fascist». The most recent investigations have confirmed it, explains Prof. Guiducci.

In the historical archives of the Diocese of Genoa, there are some dossiers concerning Petranovic, in particular his letters addressed to Cardinal Siri. In these (dated 1948), the Croatian priest complains with Siri about the prohibition to host Croatian refugees in ecclesiastical dorms, but the letters reveal much else. Historian Guiducci explains that «Petranovic could not boast any specific mandate or authorisation from the Genoese Church for his work. This is shown by the fact that he has to introduce himself and to tell his whole story. Moreover, Petranovic was not well known by Siri and even less was he trusted by him. So, we can denied the statements of the authors who want to present Petranovic as protected by Prelates and authorised to travel with the cars of the Curia. It does not even seem that Petranovic enjoyed any particular support or approval by the Genoese clergy; indeed, he does not mention acquaintances and complains, instead, about the enduring prejudice towards him».

Finally, the secretary of Cardinal Siri, Fr. Mario Grone, testified not to have ever heard or seen anything like this, let alone to have learnt about a certain private confidence about a «direct or indirect action by the Genoese Curia to favour awarely the passage of Nazi criminals fleeing to South America. I am induced to believe that this never happened, because Cardinal Siri always manifested the utmost confidence towards me. Finally, as caretaker of his personal files, after his death, I can witness that I have not found any record of this issue in the correspondence».

Extra-Biblical testimonies to Jesus of Nazareth »