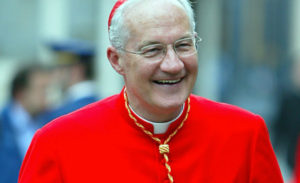 The Viganò case and Ouellet. The former nuncio’s charges against Pope Francis have been defined as “false” and “blasphemous” by an ex close collaborator of Benedict XVI and by a pupil of John Paul II, Card. Marc Ouellet. His’ are well-documented replies, unlike the accusations by Viganò, after days of study in the Vatican’s archives.

And after the Viganò dossier, few hours ago the Ouellet dossier came out, which, based on a deep knowledge of the archival documents, debunks the charges and the reconstructions by the former apostolic nuncio. But who is Marc Ouellet? A loyalist to John Paul II and, above-all, to Benedict XVI. Back when no-one would have imagined, it was even anti-Bergoglian Vaticanist Sandro Magister to witness it, as he reported that Ouellet and Ratzinger’s «friendship is long-standing, strengthened by common battles». In a  second article, dated 2013, Magister defined Ouellet «a cardinal of solid Ratzingerian background and rich in talents».

Effectively, after having been created cardinal in 2003 by John Paul II, appointed by him as prefect of the Congregation for Bishops, Preisdent of the Pontifical Commission for Latin America, Metropolitan Archbishop of Québec, and Primate of Canada, Ouellet participated in the Conclave which elected his friend Benedict XVI (some say that Ratzinger voted for him as successor to Wojtyla), of whom he became a close collaborator. Few months ago, Ouellet proved to keep a privately in touch with the Pope Emeritus still today.

As we said, in an open letter to ex Nuncio Viganò, Card. Ouellet defined his dossier as a «political maneuver without any real foundation». He stated in advance to write his testimony «based on my personal contacts and on archival documents of the aforementioned Congregation, which are currently the subject of a study in order to shed light on this sad case», by referring to the incredible career of the prelate and abuser Theodore McCarrick, although many had known about him even since 2001. Here some excerpts of his testimony, commented and contextualised by us.

If Viganò’s charge against Pope Francis is to have let himself be influenced by McCarrick despite the nuncio’s warning during the audience in 2013 on the controversial past of the prelate in question, Card. Ouellet replies so:

«Francis on 23 June 2013 on the McCarrick case during the audience he granted to you, along with the many other pontifical representatives whom he then met for the first time on that day. I imagine the enormous quantity of verbal and written information that he would have gathered on that occasion about many persons and situations. I strongly doubt that McCarrick was of interest to him to the point that you believed him to be, since at the moment he was an 82-year-old Archbishop Emeritus who had been without an appointment for seven years. In addition, the written brief prepared for you by the Congregation for Bishops at the beginning of your service in 2011, said nothing about McCarrick other than what I told you in person about his situation as an emeritus Bishop who was supposed to obey certain conditions and restrictions due to the rumors surrounding his past behavior. Since I became Prefect of this Congregation on 30 June 2010, I never brought up the McCarrick case in an audience with Pope Benedict XVI or Pope Francis until these last days, after his removal from the College of Cardinals. The former Cardinal, who had retired in May 2006, had been strongly advised not to travel and not to appear in public, so as not to provoke additional rumors in his regard. It is false to present the measures taken in his regard as “sanctions” decreed by Pope Benedict XVI and revoked by Pope Francis. After re-examining the archives, I can ascertain that there are no corresponding documents signed by either Pope, neither is there a note of an audience with my predecessor, Cardinal Giovanni-Battista Re, giving Archbishop Emeritus McCarrick an obligatory mandate of silence and to retire to a private life, carrying canonical penalties. The reason being that at that time, unlike today, there was not sufficient proof of his alleged guilt».

Marc Ouellet, therefore, contrary to what was written by the ex nuncio, reveals that on the part of Viganò there has never been any written communication on Card. McCarrick. And, indeed, studying the Vatican archives, he states that there is no archive or dossier on this prelate. For this reason, Ouellet adds: «your current position appears incomprehensible and extremely deplorable to me, not only because of the confusion that it sows in the People of God, but also because your public accusations seriously damage the reputation of the Successors of the Apostles».

The Canadian Cardinal suspects that Msgr. Viganò himself was subject to undue pressures, even without mentioning Vaticanists Aldo Maria Valli and Marco Tosatti, whom many consider Viganò’s ghostwriters:

«I tell you frankly that I believe it is incredible and unlikely from many points of view to accuse Pope Francis of having covered up after having full knowledge of the facts of this presumed sexual predator, and therefore of being an accomplice in the corruption rampant in the Church, to the point of considering him unfit to continue his reforms as the first Shepherd of the Church. I cannot understand how you could have allowed yourself to be convinced of this monstrous accusation which has no standing. Francis had nothing to do with the promotion of McCarrick to New York, Metuchen, Newark or Washington. He divested him from the dignity of Cardinal when a credible accusation of the abuse of a minor became evident».

In his dossier, ex Nuncio Viganò writes that Francis «did not take into account the sanctions that Pope Benedict had imposed on McCarrick and made him his trusted counselor». According to Card. Ouellet, the charge is aberrant:

«I have never heard Pope Francis allude to this self-styled advisor during his pontificate regarding nominations in America, though he does not hide the trust that he has in some of the Bishops. I presume that they are not preferred by you or by those friends who support your interpretation of the facts. I therefore consider it to be aberrant that you should profit by the horrible scandal of the sexual abuse of minors in the United States to inflict such an unprecedented and unmerited blow on the moral authority of your Superior, the Supreme Pontiff. I have the privilege of meeting at length each week with Pope Francis, in order to deal with the nominations of Bishops and the problems that affect their office. I know very well how he handles persons and problems: very charitably, mercifully, attentively and seriously, as you yourself have experienced. Reading how you concluded your last message, apparently very spiritual, mocking and casting doubt on his faith, seemed to me to be really too sarcastic, even blasphemous!».

Blasphemy. A very harsh judgment on the action of Msgr. Viganò, which coincides with the repeated requests by Pope Francis to pray for the unity of the Church, which the Devil would like to compromise. The last one dates back to today’s Angelus.

In another important passage, Card. Ouellet asks for the conversion and repentance of his fellow brother Viganò as a result of his rebellion and of having cast a malevolent doubt and turned hundreds of faithful off from the Church:

«Dear fellow brother, I truly want to help you retrieve communion with him who is the visible guarantor of the Catholic Church’s communion. I understand that bitterness and delusions have been a part of your journey in service to the Holy See, but you cannot conclude your priestly life in this way, in open and scandalous rebellion, which is inflicting a very painful wound on the Bride of Christ, whom you claim to serve better, thus aggravating the division and confusion in the People of God! In what other way can I respond to your request other than to say: come out of hiding, repent from this revolt and retrieve better feelings toward the Holy Father, instead of exacerbating hostility against him. How can you celebrate the Holy Eucharist and pronounce his name in the Canon of the Mass? How can you pray the Holy Rosary, the Prayer to St Michael the Archangel, and to the Mother of God, condemning him whom She protects and accompanies every single day in his heavy and courageous ministry?».

The Ratzingerian cardinal shows the complicated and confused spiritual situation of many little Viganòs who in these years have turned the war against the Successor of Peter into their daily fight. Catholics who create scandal first of all in themselves, embarrassed during the Eucharist. To come out of this interior schism, some adhered to alternative sects,  like the one of Alessandro Minutella.

Card. Ouellet’s conclusion is that the Viganò dossier is a political manoeuvre without any real foundation:

«Responding to your unjust and unjustified attack, dear Viganò, I therefore conclude that the accusation is a political maneuver without any real foundation to be able to incriminate the Pope, and I repeat that it is deeply wounding the Church’s communion. It would please God that this injustice be quickly repaired and that Pope Francis might continue to be recognized for who he is: an eminent pastor, a compassionate and firm father, a prophetic charism for the Church and for the world. May he continue his missionary reform joyfully and in full confidence, comforted by the prayer of the People of God and by the renewed solidarity of the entire Church together with Mary, Queen of the Holy Rosary».

We are therefore reading a (first?) testimony of fundamental importance which contributes to expose the falsehoods of former Nuncio Viganò, already emerged in the first days after the publication of his report. For this reason, his words are rightly circulating worldwide. Not only was Ouellet a collaborator of Carlo Maria Viganò himself when the latter was apostolic nuncio in Washington, but he speaks with full knowledge of the facts and in the name of the archival documents, those which Msgr. Viganò has never wanted to cite. It is a cardinal deemed “conservative” (we apologise to him for this political label which we deem erroneous and reductive), a personal friend to Benedict XVI, and a faithful servant of the Church.

He is just like the personal secretary of Benedict XVI, Georg Gänswein, who immediately intervened to expose the lie of Timothy Busch, lawyer and friend of Archbishop Carlo Maria Viganò, when he spread the news that Ratzinger would have confirmed the report. The same may be said about the ex spokesman of the Pope Emeritus, Father Federico Lombardi, who debunked the false reconstruction of Viganò on the meeting between the Pope and Kim Davis, occurred during the pastoral journey of the Pope to the United States.

Few hours ago, Michele Brambilla, editorialist of the Italian conservative newspaper, Il Giornale, was still unaware of the letter by Card. Ouellet. However, he wrote a clear judgment which we share: «Msgr. Viganò does nothing but repeat, at the beginning of every invective of his’, that he speaks “for the good of the Church”, that he follows “the duty of a baptised person”, and all these words bear the evident signs of an excusatio non petita. If he really remembered being baptised, Msgr. Viganò would never ask for the Pope’s resignation, because he would know that the Pope is the Vicar of Christ. Asking for the resignation of a Pope because he would not have punished enough a cardinal (besides removed by him) is an absurdity which speaks for itself. The clear, evident truth is that these public polemics are made for the evil, not for the good of the Church». 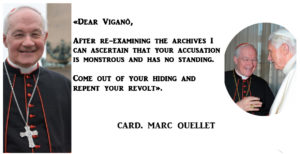 « Card. Caffarra: «Let who is against the Pope go away; he will lose himself»

“Jesus did not want to found a new religion”: how to answer? »