Card. Caffarra: «Let who is against the Pope go away; he will lose himself» 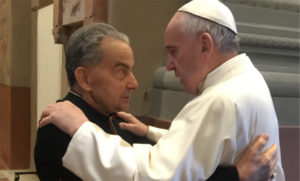 Card. Caffarra, the dubia, and Pope Francis. One year after the death of the Archbishop of Bologna, many are remembering him. Amongst them, there are also the critics of the Pope, who exalted Card. Caffarra after the perplexities manifested about Amoris Laetitia. But three years before he passed on, Father Carlo gave a teaching on which many avoided reflecting.

Created Cardinal by Benedict XVI in 2006, Carlo Caffarra was always a lucid witness, an international point of reference of moral theology. «A great master», as defined yesterday by Msgr. Massimo Camisasca, Bishop of Reggio Emilia-Guastalla, during a commemorative Mass celebrated by Matteo Zuppi, Archbishop of Bologna. «His task first of all as theologian and then as Bishop was to feed himself continuously with God’s truth to transmit it to the people entrusted to him. He was able to reconcile continuously reason with the reasons of faith, he showed us paths that reason can follow and those that only faith can illuminate. I am happy to have known Father Carlo, to have been able to live with him many moments of my maturity and of the beginning of my old age, to have been a witness of his infinite love the Church and for the Pope».

The ending of Bishop Camisasca’s speech was not casual, since for many the name Caffarra is reduced to one of the Cardinals of the dubia, the five formal questions posed to the Pope and to the Congregation for the Doctrine of Faith about a chapter of the apostolic exhortation Amoris Laetitia. These requests for clarification which we have deemed legitimate since the beginning, even though we agree with the then Prefect of the Congregation for the Doctrine of Faith, Gerhard Ludwig Müller, on the questionableness of the choice to make them public. A decision that, in hindsight, did not help much if not to transform everything – despite the genuine intentions of the Cardinals – into an exacerbating public blackmail. «I did not like it. It is harmful for the Church to talk about these things publicly» – commented Müller. The dubia have also been recently criticised by Card. Angelo Scola, ex Archbishop of Milan: «They reveal an intellectualist approach where theology and morality are conceived in deductivist terms. Moreover, the “dubia”, in my opinion, do not adequately highlight the sponsal nature of the Eucharist as the foundation of marriage, which is at the basis of its ecclesial relevance» (A. Scola, L. Geninazzi, Ho scommesso sulla libertà, Solferino edizioni 2018).

We believe that the Cardinal would not have liked to know that the proceedings of a conference in his memory have just been published by the Veronese editor Fede & Cultura, which, despite some good books edited, has unfortunately become in the last years the most rabid sponsor of Alessandro Minutella, a priest suspended a divinis, and the organiser of gatherings, in Verona, of the traditionalist cult leader, who extols the schism in the Church. Giovanni Zenone, President of Fede&Cultura and most faithful to Father Minutella – defended by La Nuova Bussola Quotidiana as the “defender of the correct Catholic doctrine” – was excluded from teaching religion in schools by Bishop Zenti, both because some parents complained about the use of the Catechism of Saint Pius X (instead of the current one) and for his frenetic activity as anti-Papist blogger. Not only against Francis, but also against Pius IX and Benedict XVI, who – wrote Zenone – is «affected by the vice of passed off as prudence».

Since the good name of Card. Caffarra is today used by people who have little to do with Catholicism, it is useful to recall a teaching of the ex Archbishop of Bologna when in 2014 someone defined him an “adversary” of Pope Francis. «It is a thing that has profoundly saddened me, because it is defamatory» – answered Caffarra by choosing every word with accuracy. «I was born Papist, I lived as a Papist, and I mean to die a Papist! If a Bishop has a thought contrary to that of the Pope» – he concluded: «he must go away, but really he must go away from the diocese. Because he would lead the faithful into a path that is not the one of Jesus Christ anymore. Therefore, he would lose himself eternally and would risk the eternal loss of the faithful».

Caffarra’s warning was listened to very little. His words were not diplomatic at all: he did not invoke the (relativistic) right to criticise the Pope when he is wrong, and did not write lengthy pages of exceptions to Papal infallibility, justifications that one always reads in defence of every kind of insult or vulgarity towards the “heretical” Pontiff. Frontally opposing and biasedly, tenaciously, and proudly resisting against the Successor of Peter means for Caffarra taking the road to eternal damnation. Whilst the questions on Amoris Laetitia were diffused in 2016, on April 2017 Caffarra and Bergoglio met at Carpi’s Cathedral and hugged each other in a brotherly way. Five months later, the Lord called the loved Emilian Archbishop to himself, and that public gesture of affection was more eloquent than many dubia.

« Gay suicides? Nothing to do with homophobia; relationships are the cause