Peter Singer, guru of secular bioethics: «Disabled? Ok to rape, they do not understand it 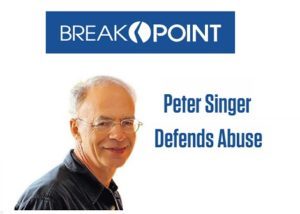 There are not few theorists of a secular bioethics, which denies a moral law inherent in man. The loss of absolutes is the first consequence, and the second is relativism, one of whose variant is called utilitarianism. The theorist thereof has been, for years, Peter Singer, Professor at the Princeton University, vegan, and anti-specist, having recently come back again to raise a debate.

In Italy, the most successful experiment of secular bioethics is that of the Consulta di Bioetica [Commission of Bioethics], directed by Maurizio Mori. In 2012, it appeared on all the front pages of the newspapers, as two members of the board, Alberto Giubilini and Francesca Minerva, overly justified infanticide. The international indignation notwithstanding, Mori himself supported the thesis of his researchers.

But the real leader of international secular bioethics is, as already said, Peter Singer. Even he is the author of similar theses: «Neither the newborn nor a fish are persons; killing these being is not morally as negative as killing a person». «Even though the baby will be able to have a life without excessive suffering, like in the case of the Down Syndrome, but the parents think that it is an excessive burden for them and want to have another one, this may be a reason to kill him».  (Ripensare alla vita, Il Saggiatore 1996, p. 20). The association isabled Peoples’ International defined him a «frightening Mengele». In an editorial on the New York Times, some time ago he commented the case of Anna Stubblefield, convicted for having sexually assaulted a student of hers affected by a serious cerebral palsy. The woman acted as a tutor towards him and became persuaded with the birth of romantic feelings with the disabled, thereby going so far as have sexual relations with him and being denounced by the family. Princeton’s bioethicist defended the woman:

«If we assume that he is profoundly cognitively impaired, we should concede that he cannot understand the normal significance of sexual relations between persons or the meaning and significance of sexual violation. These are, after all, difficult to articulate even for persons of normal cognitive capacity. In that case, he is incapable of giving or withholding informed consent to sexual relations; indeed, he may lack the concept of consent altogether. This does not exclude the possibility that he was wronged by Stubblefield, but it makes it less clear what the nature of the wrong might be. It seems reasonable to assume that the experience was pleasurable to him […]. On the assumption that he is profoundly cognitively impaired, therefore, it seems that if Stubblefield wronged or harmed him, it must have been in a way that he is incapable of understanding and that affected his experience only pleasurably».

The sociologist of Harvard University, Nathan J. Robinson, claims that Singer has elaborated «a philosophical defense of raping disabled people». Similar accusations have come from many, but things are not really so. The philosopher only maintained that Stubblefield should not have been convicted if the disabled was not able to give his consent to the sexual act; he did not legitimise the rape of the disabled.

The whole issue stems from the guiding moral principle of most secular Peter Singer, that is utilitarianism: an action is morally good only if produces happiness, satisfaction, or pleasure (and viceversa). This vision excludes the existence of Good and Evil as moral absolutes, and bases the evaluation merely on the consequences: the problem is that serious torts (or very good merits) even if no suffering is caused. Betraying one’s partner, behind his/her back, is an immoral act anyway; stealing is a serious tort, even though nobody is aware of it. If the good is the highest happiness of the greatest number of people – according to the classical formula of utilitarianism – and if the greatest number of people is cannibal, cannibalism automatically becomes a good.

In the case in question, Singer is supposing that the disabled is not even capable of conceiving the notion of consent or of violation of himself, and for this reason one cannot say that the woman violated him. The only reasons to judge the wrongness of his action – the utilitarian philosopher maintains – are related to suffering: but there is no evidence that the disabled suffered. On the contrary, he concluded: it is very probable that he felt pleasure.

If there is no absolute (transcendent) moral orientation, then there is nothing that pulls us out of ourselves; thus, pleasure is the only criterion yardstick of morality. The philosopher simply applied to the seriously disabled what he had been maintaining for years with respect to animals: having sexual relations with beasts is morally acceptable because we are animals ourselves and, secondly, we feel pleasure whilst they cannot be proved to feel unease or pain. And the same he claimed about necrophilia: there is no harm, but there is pleasure; therefore, there is «no moral problem».

A comment to Peter Singer, guru of secular bioethics: «Disabled? Ok to rape, they do not understand it

« The Pope rewrites the Lord’s Prayer? The modification on “temptation” dates back to 2008

Aldo Brandirali: from Marx to Christ… passing through Father Giussani »