The Pope rewrites the Lord’s Prayer? The modification on “temptation” dates back to 2008 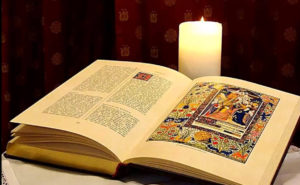 «The “Our Father” is not the one of Pope Benedict XVI. God does not lead us into temptation!! Benedict XVI was fooled by the Devil». We read this on November 2007 on traditionalist websites, when Jorge Mario Bergoglio was a “simple” Argentinian Archbishop.

But, at that time, these people were an isolated voice, lacking – contrary to nowadays – the mediatic support of the religious right wind (or, better, “divine” right wing, as Camillo Langone calls it). The latter is accusing Francis of being willing to change the Pater Noster, but they ignore that the form “do not abandon us in temptation” was introduced in 2008.

It is the task of theologians – not ours – to evaluate the matter of the opportuneness or not of a better translation of the prayer taught by Jesus in the Gospels. Simply, we want to show how self-proclaimed Ratzingerians whose existential mission is the war against the Pontiff in charge – on any topic – find themselves fight even against Benedict XVI. «The Our Father will be modified and edulcorated» – has recently denounced, for example, journalist Marco Tosatti, leader of the “anti-Bergoglian resistance”. «With this effrontery, one dares to tamper with a two-thousand-year-old text? In Germany, even atheists objected to the new translation, supported by Bergoglio». But not by the Pope Emeritus, under whom it was born and approved of.

From these criticisms – shared also by many others and not peculiar only to our friend Tosatti – a serious journalistic lack of preparation and a poor familiarity with the Gospels emerge. Indeed, it is since the translation by the Italian Episcopal Conference published in 2008 by the Vatican Publishing House, with the placet of Benedict XVI, that the so much discussed modification of Scripture has been authorised: «The choice of the Permanent Council was to intervene only if it had really been absolutely necessary for the correctness of the translation» s – explained Msgr. Giuseppe Betori, the then secretary of the Italian Episcopal Conference. «In the case of the “Our Father”, the idea was consolidated that it was now urgent to correct the “do not lead us”, currently intended in Italian as “do not constrain us”. The Latin inducere (or the Greek eisferein) does not, in fact, mean “constraining”, but “guiding towards”, “guiding in”, “introducing into” and does not have that connotation of obligatoriness and constraint that the verb “indurre” [lead] has taken on in Italian, so as to project it [this connotation] inside today’s formulation of the “Our Father” and to give God a responsibility – in “leading” us into temptation – which is not theologically founded. That is why we have then chosen the translation “do not abandon us in”, which has a double meaning: “do not allow us to enter temptation”, but also “do not leave us alone when we are tempted”».

Heaven forbid! The self-styled Catholic “compasses”, silent when the modification occurred at the time of Ratzinger, found the new pretext to condemn again the Pope as a heretic: Bergoglio dares to change the word of Jesus. A surprise, instead, on the Secolo d’Italia: «The Pope and the Our Father: but the corrections had already been made by the Italian Episcopal Conference at the time of Ratzinger».

« «The return of God? Inevitable: man has a call to transcendence in himself»

Peter Singer, guru of secular bioethics: «Disabled? Ok to rape, they do not understand it »