Shroud of Turin: “False Bloodstains”? The only falsehood is the new study 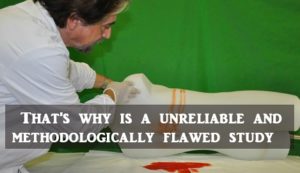 Exactly 40 years ago, in 1978, the Shroud of Turin was deemed “fake” because researcher Walter McCrone affirmed (erroneously) that there were no traces of blood on the linen cloth, but a mixture of iron oxide and vermilion pigments. Yesterday, after bitterly swallowing that, yes, there is human blood, two notorious sceptics of the authenticity of the Shroud concluded, though, that the stains were unrealistic as compared to the position of a crucified person.

In the last hours, we have been overwhelmed with requests to answer and refute this new study, published on the Journal of Forensic Sciences. However, in principle, all researches should be welcomed, both in favour or against the authenticity of the Shroud (which nobody, not even the Church, obliges to consider authentic). Of course, when all the mediatic apparatus talks in perfect synchrony about the “falsity” of the Shroud without this conclusion being even held by the study (where we only read “unrealistic bleeding”), and when we read that the author is, as usual, the chemist of Pavia Luigi Garlaschelli (scientific director of the CICAP, the Italian Committee for the investigation of claims by the pseudosciences), who has already failed similar experiments on the Shroud, then the suspicion of hoax begins to arise.

Analysing the research with accuracy and objectivity, we read that the two researchers used a mannequin by pouring – through a cannula – some blood imbued added with an anticoagulant to observe the direction of the blood flow and comparing its pathway with the one observable on the Shroud image. Garlaschelli himself, afterwards, poured some blood – always added with the anticoagulant – on his wrist. To obtain stains similar to the Shroud’s, they concluded, the arms should have been in an almost vertical position, which is why the media deduced the “hoax of the Shroud”.

What clearly makes the experiment unreliable is the persistent mistake by Garlaschelli of comparing two “objects” with different characteristics. If we compare different situations, it is obvious and logical that the results will be different; it would be – really, this time – unrealistic to expect them to be identical. Even physicist Paolo di Lazzaro, research manager of the Frascati Center of Research and Vice Director of the International Centre of Sindonology, claimed so: «You can see it well in the film that accompanies the research: the blood from the cannula flows on the arm in a very fluid way, to the point that it almost looks like colored water. This is due to the presence of anticoagulant, which is essential to preserve the fluid blood in the bag. But this fluidity of the blood used for the experiment has nothing to do with the situation of the crucified man of the Shroud. The man of the Shroud had been subjected to stress», to repeated traumas observable from the very Shroud image. «As a result, this person’s blood had to be more viscous than normal and therefore the pathways of the streams coming out of the wounds may have taken very different directions from those of the fluidized blood used in this experiment».

A second variable that modifies the blood pathway is the difference in the speed at which a liquid is introduced into the cannula coursing on Garlaschelli’s arm as opposed to the one at which the blood comes out of the wounds of a crucified man or, alternatively, is poured, more or less resolutely, on the cloth, in the hypothesis of subsequent additions by a forger. This is a data that is unknown and, for this reason, cannot be reproduced in an experiment. «Does it seem like a scientific criterion to take a mannequin — like the ones used to display clothes in a store window — and a sponge soaked in fake blood attached to a piece wood that is pressed on the right side of a dummy to see where the streams of blood fall?» – commented Emanuela Marinelli, a famous Italian expert, surprised with the lack of professionalism. «It suffices to pay, and researches are done» – explained Marinelli – «and you also find someone who publishes them».

It is not over. The third huge mistake is to have compared the smooth skin of Garlaschelli and the plastic mannequin with the one of the Shroud’s Man. The latter, as always shown by the Shroud image, presents a cutaneous surface full of dirt, encrustations, lacerations, contusions, scratches, and wounds. It is normal, therefore, that the blood flow behaves differently and takes different directions. Always Di Lazzaro rightly observed: «One thing is the clean and intact skin of Professor Garlaschelli, who lent his body for the experiment, another is the swollen skin of a tortured and dehydrated man. On the Shroud, we found traces of soil, to testify that the skin of the man of the Shroud was dirty due to repeated falls. The skin of the crucified one had to be sweated, dirty with soil, swollen with hematomas and encrusted with blood from the whip-inflicted wounds». Once again: the blood flows being identical would have been unrealistic – not their being different.

Thus, concluded Di Lazzaro, «before drawing any conclusions, a serious scientist must take into account the experimental limits, the unknown parameters», and the differences between reality and what he wants to reproduce in an aseptic lab. «We cannot say that the Shroud‘s blood flows are not congruent with the position of a crucified man if we do not take into account the conditions of the dehydrated sindonic man, with the viscous blood and the swollen, dirty and sweaty skin. For this reason, I believe that the results of this research should be considered as less than preliminary, waiting for an experiment that attempts to reproduce the spots visible on the Shroud using parameters of blood and skin closer to those that they want to reproduce. In fact, this article by Borrelli and Garlaschelli does not answer (and indeed reinforces) the concerns already raised by experts in 2014.» Yes, because, among other things, the study dates back to four years ago, when it was presented, without being published, to a Conference on Forensic Medicine in the USA: «Even then» – says the physicist of Aeneas – «there were considerable concerns from doctors about the validity of the results. Now that same study, with the addition of some new experiment, has been published».

In 2014, the couple Garlaschelli&Borrini had altready attempted to take the long shot by saying that Jesus would have been crucified with the arms behind his head in a “Y” shape and not in a “T” one, so as to conclude that the imprint of the body present on the Shroud did not correspond to the classical representations of the crucifixion used traditionally in the time of Jesus. In 2009, the always indomitable Garlaschelli was lavishly financed by the Union of Rationalist Atheists and Agnostics (UAAR) to create a “second” Shroud by using pigments, chemical paints, and acids available to the hypothetical medieval forger. The result was so disappointing and different from the original, that even atheist mathematician Piergiorgio Odifreddi (honorary president of the UAAR, by the way) distanced himself from it; the chemist of the CICAP was so much criticised by the experts (here an example), that the experiment sunk into oblivion.

In conclusion, the authors of the study have not talked about “false bloodstains” as reported by the news agencies (and then, copying from each other, by the main newspapers), but at the most about an unrealistic bleeding on the Shroud as compared to what happened in their lab experiment. And it is an obvious and foreseeable conclusion, since the experiment was not ethically correct and is methdologically flawed: it put in comparison two different substances (blood added with an anticoagulant, in a lab), two different surfaces for the dripping (a clean body, devoid of tumefactions, wounds, and lacerations, in a lab) while overlooking important variables that may have altered the blood direction, like the outflow speed, people having touched the body of the Shroud’s Man after his death, his being wrapped in the same linen cloth, his foreseeable jerky movements during the suffered tortures, etc. Studies of professional researchers are really welcome, whether sceptical or not. But, please, next time let Garlaschelli work only as mannequin.

The Pope: «Family is only between man and woman». But he has already said it many times! »