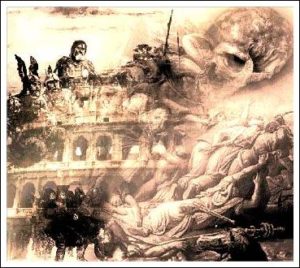 In this section particular importance is given to the history of the Church. To start with, we will try to demonstrate why the whole world should be thankful to Christianity, with reference to the importance of its presence in the history of mankind.

Indeed, there has been no better choice than that of understanding human history as divided into a “before” and an “after” Christ. There has been no better judgment than that of the historian and philosopher Benedetto Croce who wrote: “we cannot help calling ourselves Christians”. You may not be a believer, but you cannot help acknowledging that the origin of human civilization, of the concept of “person”, of the values and the fundamental rights of the human being, his uniqueness, come from Christianity.

Furthermore, we will focus our attention on a precise and detailed revision of the historical issues that have always been used by the secularist mentality to fight the Church and its presence in the world. As German historian Michael Hesemann affirmed, anticlericalism “used the traditional secret weapon of losers: defamation. It’s all created through accurate falsification, grotesque alterations and horror stories made up on purpose. It seems that there’s a bunch of authors competing to depict the Gospels as stories full of lies, the popes as power-hungry criminals, the Church as a tool for oppression and Rome as the last fortress of intolerance”. (Micheal Hesemann, original title “Die Dunkelmänner”, English title “The black legends”. Our translation.) That’s how the famous black legends were made up, digging out macabre tales invented by the persecutors of the early Christians, by the Reform movements, by the Enlightenment philosophers, by the Masonry or by the ideologists of modern dictatorships. Conspiracy theories dating from a few centuries ago easily became the new ingredients for modern bestsellers and it doesn’t take long to find in some bookshops whole sections devoted to this kind of novel (it could even be next to the ufology section).

There is no doubt that in the past unspeakable injustices and terrible deeds were carried out in the name of the Church. All these cases, however, were thoroughly disloyal to the message of Christ and to the Church itself. It is primarily the fact that inside the Church these scandals become huge, contrary to what happens in any other institution, that shows how these crimes in fact betrayed the message of Christianity, even when spread by those lacking in morality. Even churchmen, in fact, were influenced by the mentality of their time. It often happened that they wished to do something good, but did something bad. That’s what pope John Paul II wanted to stress on the Jubilee of 2000, as he led the whole Catholic Church through a great act of contrition for all the deeds committed in the past two millennia.