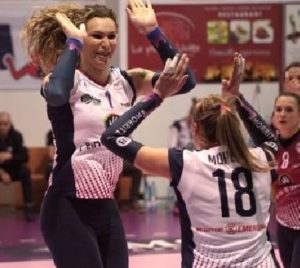 They also want to destroy the sport. The Lgbt lobby is defending the precence of trans people in women’s volleyballs, but the female players preparing a class action. The sporting ethics is in danger, said Italian luminary Arsenio Veicsteinas, tenured Professor of Physiology at the State University of Milan.

All-out war against women: gay Senator Sergio Lo Giudice – who has purchased a child and taken him away from his biological mother – wants teach the meaning of motherhood to the Italian women; from the USA we heard of the testimony to basketball player Candice Wiggins, who withdrew because she was discriminated and bullied as heterosexual; the gay community denies entry to women, as if they were animals. Today, a transsexsual man wants to play against female players. And feminists? They are silent.

The case has arisen with Tiffany (Rodrigo) Pereira, a Brazilian trans who plays for Golem Palmi, a volleyball team in Italian A2 Female League. Other teams feel disadvantaged and sport is in danger because a “rush to transgender players” may occur. The Millenium team’s president said: «What happens if we go to Brazil, hire three transsexuals and bring them to play in the female A2 championship? We win the championship, but that’s not fair». «They’re cheating, they make a man play instead of a woman against other women», wrote Teresa Moro. Rodrigo «knows he has a male body: he has the muscle tone, bone density and physical strength of a person with XY genetic heritage. I’m a woman and I say: it is not chivalrous for a man to spike the ball on a woman. It’s cowardly».

Those who defend Rodrigo claimed that he is weakened by the hormone treatment. But this is not the issue.  Is it is enough to be physically weak to be called “woman”? Is the woman just a man with long hair and small muscles? Is a hormonal question the only difference between men and woman? Is it enough to wear a mask to be really Harlequin? The answer is “no”! In the name of respect for women and men, the opposite should happen: but no woman, even disguised as and exteriorly resembling a man, will ever consider playing in the professional volleyball male team and receive smashes at 50 km/h by Ivan Zaytsev.

A important luminary of human physiology, Dr. Arsenio Veicsteinas, from the State University of Milan and Dean of Science of movement Department, said: «The etichs of sport is to compete on equal terms. Who is born male has male anatomical features. If you choose to change your sex, you always keep your DNA, despite the hormone treatment. All this seems to me so superficial and demagogic, descending from a mistaken tendency of our day to open everything to everyone. Fair play is being undermined especially for a man who turns into a woman: in the face of the protests of a woman, how can we say that the game was played on equal terms?».

Yet, the confused modern man is manipulated like a puppet by major powers (and the gay power is one of the main ones), and struggles even to understand the most obvious facts. «Each of us can become what he wants», said transsexual Vladimiro Guadagno (aka Luxuria). «This must be said seen the beginning, by acting on children, not to find ourselves tomorrow with sexist and chauvinist adults». Tricking the children, getting into the schools, destroying the sporting ethics in the name of a «ideological colonisation», as Pope Francis has called it.

«“Sex change” is biologically impossible», explained Paul R. McHugh, Professor Emeritus of Psychology at theJohns Hopkins University School of Medicine. «People who undergo sex-reassignment surgery do not change from men to women or vice versa. Rather, they become feminised men or masculinised women». Nobody is born in a “wrong body”, even volleyball player Rodrigo. We hope that the class action will go on, in the name of respect of sport and of womanhood.

« Trinity and monotheism: answers to the most common questions

Shroud of Turin: “False Bloodstains”? The only falsehood is the new study »