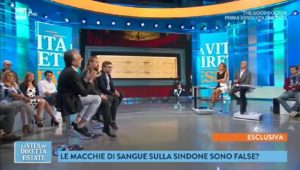 We come back, albeit briefly, on the recent study of the Shroud of Turin, concerning the pathway followed by the blood. The authors, Luigi Garlaschelli and Matteo Borrini, poured some blood on a mannequin and on the body of Garlashcelli himself, thereby comparing the blood’s pathways observable on the famous linen cloth and concluding their incompatibility. But the mistake is macroscopic, as we have written.

The kind of surface on which the liquid flows is fundamental in imprinting a certain type of trajectory on it compared to another. For this reason, it is methodologically incorrect to have compared a mannequin’s smooth plastic and the the clean and intact skin of Garlaschelli, in an aseptic lab, with the body of the Man of the Shroud, victim of tortures, flagellations, wounds, skin tumefactions, and dehydratation. Without considering, besides, the different blood density of a man dead because of traumatic stresses as opposed to the one of the blood used in the experiment.

All these are variables that clearly influenced the blood flow in a crucial way: in consideration of the two profoundly different situations put in comparison, an overlapping of the results would have been unrealistic and impossible. The criticism is decisive, so much so that the two researchers have never answered, despite having the chance of doing so.

Physicist Paolo di Lazzaro, research manager of the Aeneas of Frascati and Vice Director of the International Centre of Sindonology, expressed the same criticisms during an episode of La vita in diretta last 17th of July, albeit in the very limited time to reply that was conceded to him. Matteo Borrini, present in the studio, decided to reply only that the blood used was not only the one containing the anticoagulant, by erroneously stating that, anyway, «it does not matter whether the blood is more or less liquid, more or less viscous, because it always behaves according to the law of gravity and goes always in the same direction». It is not so: the viscosity of a liquid can determine irregular pathways and even more the flow speed. Another – unknown – data overlooked by Borrini and Garlaschelli.

In the studio there was also sceptical historian Andrea Nicolotti, who questioned even that those on the Shroud were bloodstains, thus inviting to «start everything all over again». This is science fiction: two American scientists, members of the STURP, biophysicist John H. Heller and biochemist Alan D. Adler (beside the medical examiner Pierluigi Baima Bollone), ended up – independently of one another – ascertaining the presence of blood on the Shroud and published the results on the Canadian Society of Forensic Sciences Journal. Indeed, the ultraviolet fluorescence photographs established that the stains and the belt of blood have the optical properties of serum, by observing a mixture of live blood and corpse’s blood and the presence of venous and arterial blood. The confirmation of the confirmation came, though, from Leoncio Garza Valdés, microbiologist of the University of Texas Health Science Center of San Antonio, who also recognised the blood group AB. The scientific approach by Nicolotti to the Shroud is thus at least very poor, but it is even more – as we have already observed – when he deals with the topic from the historical viewpoint.

In the video here below, Matteo Borrini expounds the experiment conducted, followed by a refutation by Paolo Di Lazzaro. In the end, the wise words of Fr. Gaetano Saraceno, who is pleased with the scientific debate, but reminds the position of the Church: «Faith is not based on the Shroud, but in the Shroud it finds the mystery and an eloquent witness».

« The “forced Christianisation” of the Americas? Some historical clarifications.

Msgr. Viganò condemned: he stole from his disabled brother while he scolded the Pope »