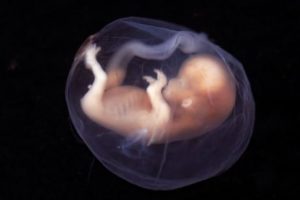 The human embryo the responsible for his own development. It is an important discovery because one of the main excuses to support abortion is that the embryo would not be a human person, it would not have intrinsic capacities and its development would be totally dependent on the mother carrying him in her womb. Some call it a “clump of cells”: in this case abortion would not be a morally reprehensible act.

An important study contradicts that: it is published on Nature Cell Biology and is called Self-organization of the human embryo in the absence of maternal tissues. Its authors, led by Marta N. Shahbazi from Cambridge University, showed that a fertilized egg (also called “zygote”), is an autonomous human being. They recognized «significant self-organizing properties of human embryos»: so, in fact, embryos have a life independent of that of their mother and autonomously direct their own development from the earliest moments of life.

The young embryos (“zygotes”), used in this experiment, were not manipulated or artificially forced to develop, but they grew up – on their own initiative – also in the absence of their mother’s womb. Dr. Ana Maria Dumitru explained that this means that «embryos know what they’re supposed to do to live, and they try to live». This is also the reason why «most “contraceptive” drugs and devices actually work as abortifacients. Rather than preventing the sperm from fertilizing the egg, they prevent the embryo from properly implanting. Without the nutrients normally provided by implantation, the embryo will die. But, as Shahbazi and her colleagues have demonstrated, if you supplement the embryo with nutrients, it will continue to fight for life».

We already know that the embryo communicates with his mother’s through signals and the exchange of nutrients in the blood, but now we find out that he is also “programmed” since conception for survival. The embryo, independently of his mother, has everything he needs to guide his growth and – also without the mother’s womb – he is directly responsibile for his own development and survival. This study, therefore, «eliminates the possibility of saying that the early embryo is not an organism or is not autonomous».

Philosophers Robert P. George, Professor at Princeton University, and Christopher Tollefsen, from the University of South Carolina (and others, like John Finnis and Patrick Lee), explained extremely well that an organism having all the capacities to become a recognisable (and extra-uterine) person is already a person because these capacities already exist in the first moments of the life of the embryo, even though they are not fully developed.

In fact, personhood is determined, not to immediately exercisable capacity, but to intrisic capacity. So, a human embryo, a newborn baby or a young teenager – although they are still developing – they have the same intrinsic capacity as an adult and fully developed human being. They are all human persons, despite the disapproval by the Secular Bioetchal Association, led by Maurizio Mori (cfr. R.P. George & C. Tollefsen, Embryo: A Defense of Human Life, The Witherspoon Institute 2011).

Human beings do not acquire their personhood at a certain stage of development; they already have it since the moment of conception. This piece of research has therefore contributed to destroy the femnist slogan “my body, my decision”: it is wrong; the zygote in the woman’s womb is not a part of his mother’s body, but he is an autonomous and independent human being. He is a human person since first moment.