From abortion to infanticide, another bioethicist approves 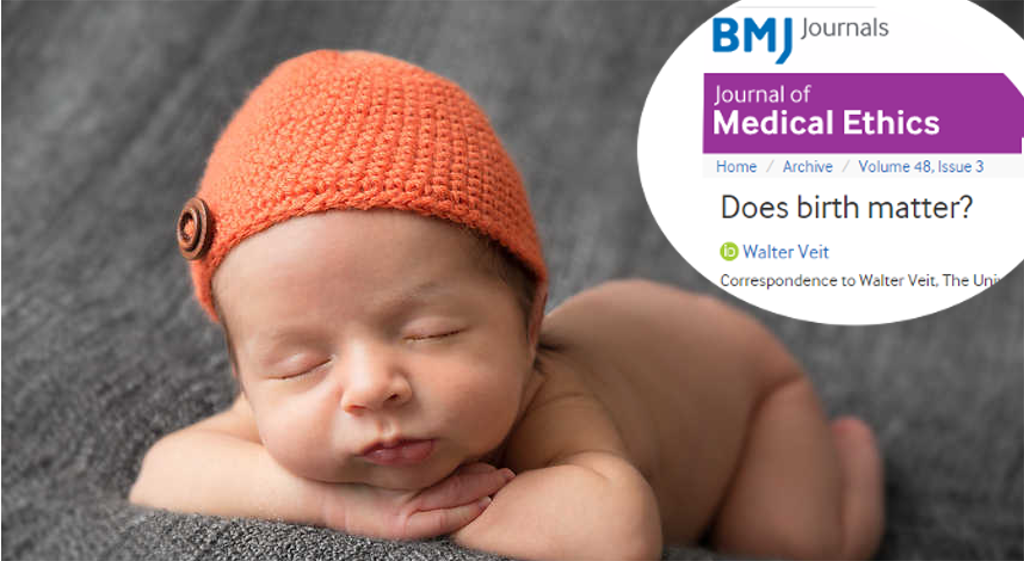 The pressure in favor of post-partum abortion continues with the same arguments in favor of pre-birth abortion. Philosopher Walter Veit sees no difference between fetus and newborn, so if abortion is morally accepted, there is no reason to oppose infanticide. Like him many others, even in Italy.

Another Australian bioethicist, the philosopher Walter Veit , has come out in defense of the supporters of infanticide who affirm the non-moral difference between children unborn and newborn babies.

“Does birth matter?” is the title of his reflection which appeared in the Journal of Medical Ethics at the beginning of March.

According to Veit, if the ethics of treating a mouse or zebrafish differ from that of a chimpanzee due to their different abilities , then treating humans should be judged the same way.

«If abortion is legal, no ban on post-partum abortion».

The Australian bioethicist explains that there is no clear biological distinction between a fetus and a born child.

Thus, noting that abortion is the killing of an unborn human being and is morally legitimized by Western society, in the name of this lack of biological difference between the fetus and the newborn does not c ‘is no argument against the post-birth abortion of an unwanted infant.

«If the biological sciences reveal that there is no morally salient difference between a newborn and a fetus», in fact, the bioethicist writes, «that is, that both are almost at the same stage of development, we must abolish the intuitively convincing idea that birth counts for something , morally. It is not so».

These arguments have their own meaning, what Walter Veit writes is true. He unwittingly shows the inconsistency of the laws that liberalize termination of pregnancy as they do not explain why from a certain moment onwards it would be forbidden to abort, while before.

In Italy, for example, the termination of pregnancy is legitimate only within the 24th week . But why? Maybe an unborn in the 23rd week and 6 days has no right to life? Birth does not count for anything, even the bioethicist is right about this: there is no substantial difference in the fetus between when it is in the mother’s womb and when it is delivered.

The development of life is continuous and gradual , just as it is impossible to determine the beginning of the day after the night.

Instead of opposing abortion, however, the bioethicist concludes in the opposite way: liberalizing infanticide . However, this opens up to further radical scenarios, as if we can kill human beings before they become people (as he believes to be newborns, fetuses and embryos), why not interrupt the life of people who lose vital capacity due to illness, injury or age-related consequences?

In Italy the Council of Bioethics wants infanticide.

Some time ago they were the Italian researchers of the Council of Bioethics onlus of Maurizio Mori – spearhead of lay bioethics (honorary members Beppino Englaro and Carlo Flamigni) and always alongside the Associazione Luca Coscioni by Marco Cappato-, who theorized infanticide with the same arguments used today by Walter Veit.

Alberto Giubilini and Francesca Minerva argued in fact that « killing a newborn should be allowed in all cases where abortion is , including those cases in which the infant is not disabled ». And again: “If a potential person, such as a fetus and a newborn baby, does not become a real person, like you and us, then there is no one who can be harmed, which means that there is no harm. badly “.

For this, concluded the heads of the Bioethics Council, «there are no reasons to ban abortion after childbirth . Non-people have no right to life “, that is, those who are not ” capable of achieving goals and appreciating their own life».

It is permissible to kill newborns , they explained, because «for damage to occur, someone must be in a position to experience such damage».

The same Maurizio Mori , philosopher and leader of the pro-euthanasia campaign who gave birth to the referendums recently rejected by the Constitutional Court, defended and supported his researchers, writing: « The thesis is not so absurd and foolish as to be rejected a priori only because it shakes deep feelings or touches very sensitive chords ».

For over thirty years the bioethicist Peter Singer has been proclaiming these theses.

«Today it seems natural that every human being has inviolable rights , which cannot be sacrificed, but this is not the case at all. It is since Jesus of Nazareth passed on this earth that everything has changed. The change in Western attitudes towards infanticide arises with the doctrine of the sanctity of human life produced by Christianity . Among the Greeks and Romans themselves, newborns did not have automatic access to life, they were killed by exposing them to the elements on the top of a hill»1Peter Singer, Practical Ethics, Cambridge University Press 2011, p. 153, 154.

In the US, pushes for abortion until birth.

Thanks to these arguments, radical pro-abortion pressures are advancing up to the moment of birth .

In the United States it was recently thwarted the Women’s Health Protection Act , which would have enshrined for the first time in a federal law the absolute right to abortion , for any reason or even for no reason, until the moment of birth.

Once human life is denigrated as morally irrelevant, what difference does birth make?

« Historians and the popular myth about the Holy Inquisition: new dossier

The gospels are four independent sources »