The Economist (pro Obama) supports Trump: no to gender self-identification 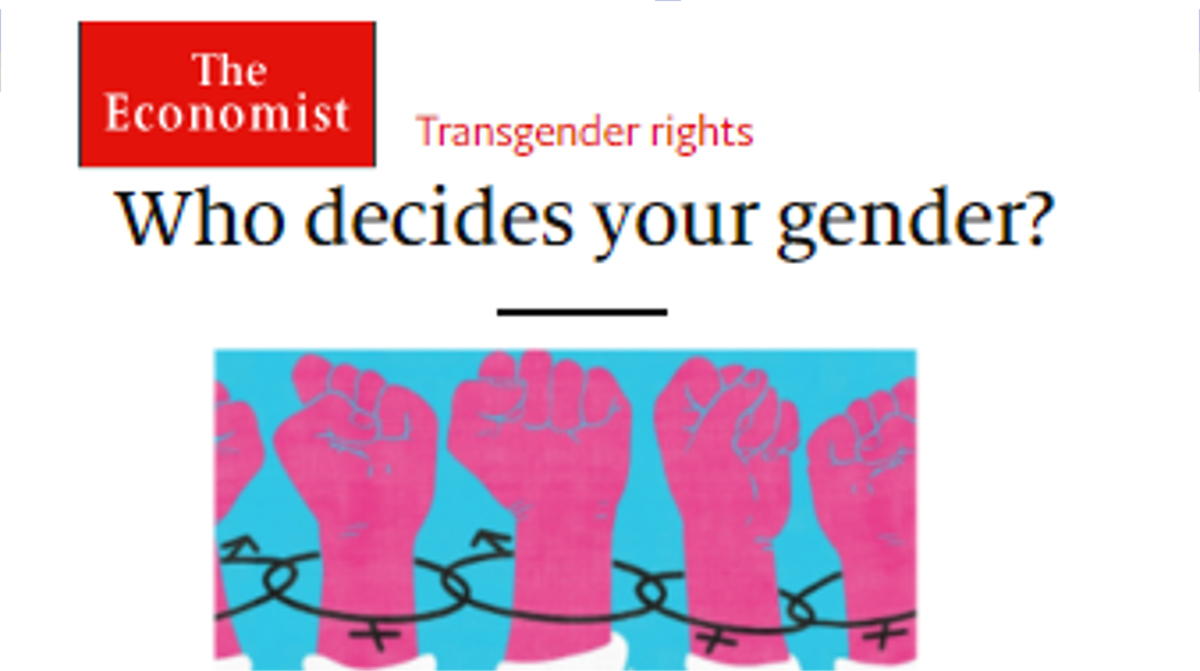 The Economist, gender, and Trump. After the decision by the American president to abolish gender and to link sex to what is anatomicaly evident at birth, the British magazine surprisingly maintains it is a mistake to liberalise the self-identification of sex.

Even the Economist says so. Over 1 million copies sold every month, the famous British weekly magazine is the best-known economic and financial magazine in the world and the most active British press agency to have supported the administration of Barack Obama. Since 2004 it has openly and explicitly advocated “egalitarian marriage”, the legalization of prostitution and drugs, and even the theory of voluntary human extinction to save the planet. The ideological context of origin is therefore clear.

“Sex is determined only on a clear and objective biological basis”

This has increased the amazement for an editorial of the Economist deemed to be in favour of Donald Trump and even to support him against gender self-identification for trans people. The current American president would indeed be preparing a bill to establish in a legal way that the sex of a person is determined only “on a biological basis that is clear, grounded in science, objective and administrable”, that is the sex attributed and decided by nature at the time of birth, thereby determining a still bigger distance from his disastrous predecessor, Obama. An act of truth and consistency with scientific evidence, abolishing the ridiculous expression “Gender X” and preventing unreal and impossible sexual transitions – as has already been forbidden in prestigious Johns Hopkins University School of Medicine – through the mutilation of genital organs that modify only the outward appearance of people and deceive them into believing they can really change their sex.

The 46-year-old mechanic feels he is a 6-year-old girl: is he really?

A global stigma was expected, which has not been, instead, so strong (yet). In Italy, it was busy and know-all Chiara Lalli to reply on Wired, by writing that «there are many other aspects which contribute to our identity», beside sex. She did not specify which ones, though, so that she comes to the absurd conclusion that Paul Wolschtt, a British 46-year-old mechanic, is in fact a 6-year-old girl only because he feels he is and so perceives his identity, independently of his genes. However, as rightly and surprisingly explained by lgbt philosopher Michela Marzano, «the body is not only something “you have”, but also and above-all something “you are”, before the certainty that it is life that imposes a body on each of us and that we cannot get rid of it without getting rid of our existence in the meantime».

And even the Economist has decided to take a stance in an editorial. Obviously, it has had to state in advance that it is «a proud champion of gay rights» and that it «first ran an editorial in favour of same-sex marriage in 1996». After the due and banal preamble, we read though:

«Some see gender self-identification for trans people as the next frontier. This starts with the idea that what makes someone a man or woman is not biological sex but an inner knowledge of who they are. Trans people have gender dysphoria, an overwhelming sense of belonging to the other sex. They suffer grievously when they cannot act on this. Even when they can, they fall victim to discrimination. The self-id campaign argues that members of an oppressed minority should be free to choose their gender identity. […] Yet this week it emerged that President Donald Trump plans to do just that».

To protect itself from the readers, the famous British weekly magazine wrote that the choice of the US administration would be “wrong”, but immediately afterwards it supported the concept that led President Trump to act:

«That is wrong. However, the state should also resist the impulse to make trans people’s legal status a matter of personal definition, as Britain is considering. The state needs to be involved for the liberal reason that the welfare gains of self-id for trans people should be balanced against the potential harm to others. Such harm is hard to quantify, but should not be dismissed lightly. Men commit almost all sexual crimes, so society sets aside spaces in order to help keep women and children safe. Were just 1% of the men in prison in Britain for sexual crimes to identify as women, it would double the number of women in prison for such offences. If “man” and “woman” are determined by self-id, spaces and institutions for women and children will become accessible to anyone. There is no reason to think that identifying as a woman makes a male any less dangerous (or any more). By contrast, there is every reason to think that predatory males will claim to be trans in order to commit crimes more easily. Statistics about crimes by trans women as such are lacking (they are increasingly being recorded and reported simply as crimes by women). If females stay out of women’s spaces because privacy or their faith dictates it, their loss of freedom and comfort will not show up in any statistics either. The welfare of children should weigh in the balance, too. Those who choose a trans identity are being started on irreversible treatment ever younger, despite evidence that without it most would change their mind. Some schools have started to teach children to understand their gender identity by introspection, not anatomy. They are told that if they are leaders and rational they are boys, and if they are nurturing and gossipy they are girls. Thus outdated gender stereotypes have come roaring back under self-id. Children who may have turned out gay are being channelled instead into a trans identity.

he impetus for action is often noble: trans people have historically been subject to terrible discrimination. But the theory of gender identity is relatively new. And how someone forms their gender identity is still poorly understood. Deciding how to balance competing rights and how to weigh risks will demand careful debate. Yet in many places discussion of trans issues has fallen prey to the illiberalism of identity politics. Anyone who questions the new orthodoxy is branded “transphobic”. Research into the harms to children from early transitioning is suppressed. Academics exploring the consequences of redefining sex categories face campaigns to get them sacked. This is a dangerous path».

A harsh editorial, then. It does not only admit the groundlessness of the lgbt arguments and criticise who seconds confused children towards their identity, but it also affirms the existence of the gender theory, so widely denied and ridiculed by gay militants. There is eventually the recognition of a homo-fascist social climate towards who is not aligned with the “new orthodoxy”, which involves researchers, too.

An inmate self-identifies as a woman and rapes 4 women

The stance taken by the Economist may be surprising, but we suspect this is a due act after what happened in New Hall women’s prison, in the North of England, about which we have already talked. After having suppressed the protests and warnings about the transfer of transsexual males to women’s prisons, four women were raped by a man who had self-identified as a woman and was thus entitled to serve his sentence in that prison. Already in that case many criticisms arrived, especially from The Spectator, a magazine close to the British conservative party. Today, more surprisingly, a weekly magazine of a completely different line of thought has joined as well.

How not to lose faith? How to transform it from feeling to certainty? »