“We’ll protect our values”: wasn’t relativism the dogma of the laical society? 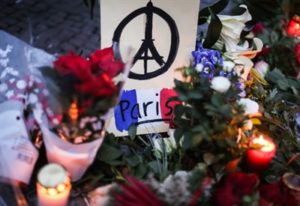 “We’ll protect our values”. That’s Obama’s, Hollande’s and Cameron’s way. The Italian Prime Minister Renzi stated that we’ll certainly win, since these are the correct and good values. But, dear Presidents, what values?

Since I was five and started to go to school I’ve been told that absolute values do not exist, that values are perspectives, and the worst you could do is to consider writing the word Truth with the capital T, and that you must cultivate doubts rather than having certainties, because these are always ideologies. How come that now, all of a sudden, we discover ourselves having absolute values that we’re warring with and for? If “not having” any values is the one big truth (which is absolute but can’t be written with the capital letter, who knows), shouldn’t we all be convinced? Shouldn’t we have already convinced those between the terrorists who were born and raised in our republics, following the “doubting education”?

What values? I ask myself, while I can’t help feeling angry for the infinite list of words, counterposed to the absolute thirst of life of the Bataclan guys, hanging from the windows to avoid death… Words that sound so empty.

Liberté, égalité, fraternité said Obama. And Valls, the French Prime Minister, specified “liberté and human rights”, to make it even clearer. Yep. Unluckily, a weird contradiction pops up when the equality and the right to support whatever and whoever are out of question as soon as someone says that he wants to kill me. Has it got the same worth as affirming peace and kindness?

In a more serious way, the American journalist Gareth Whittaker finally told us what these values are: “the enjoyment of life here on earth, a multitude of ways: a cup of coffee that smells, accompanied by a growing one morning; beautiful women in short dresses smiling freely in the streets” and then parfumes, wine, “the right not to believe in God” and of “flirting and smoking, and to the love outside marriage, taking a vacation, read any book, to go to school for free”. He’s not that wrong after all, but if this is what politicians have been talking about, they should have made it clear by the very beginning that what we’re talking about here is defending the hedonism of a low-middle-high bourgeoisie and we’re saying that these pleasures are universal values worth living and dying for. It’s no big thing, is it? Haven’t we had a Marx in Europe a while ago, teaching how every social class gets blind of universalities about itself? Moreover, and once again, shouldn’t we then try to convince the Lords of the absolute (sigh) convenience of these values of ours? Let’s try to fill the Parisians banlieues, and the suburbs of the entire world! Wait: didn’t we try to do that already, without any success? Isn’t this very empty hedonism that they’ve been reproaching?

The third option, dear Presidents, would be to go back reconsidering what values we really have, where human rights come from as well as where this passion for aesthetics and life was born, with all those pleasures included. It could also has come the time to truly reconsider the European Constitution roots: Latin and Greek origins, mixed with the obstructed Christian ones, plus the scientific and the French revolution. We should change a bit our sceptical point of view, though. I’d like to suggest the American philosopher Peirce, who actually thought the truth does exist, even if our limited knowledge makes it partial.

Warning, because partial does not mean arbitrary – we must not interpret everything according to no matter what and who – and most of all, does not mean doubtful.

“Let us not pretend to doubt in philosophy (and in pedagogy, in art, in politics) what we do not doubt in our hearts”, it’s a recapitulatory quotation by Peirce, inviting people to respect the common sense of those who helped who was escaping, hurrying through the choice of what was the human and right thing to do, and what wasn’t. And, contrary to the nice and unfortunate Imagine by John Lennon that someone played on the public crime scenes, we’ll find a valid reason to live and to die if we’ll need to.

No one’s able to “defend” or “win” anything if what you’re fighting for isn’t actually worth it, if there’s nothing good in the content, in the ideas, if we don’t like it. Especially if what we’re fighting for doesn’t have the power to fill up with life those empty words that we have to give as an answer to those guys hanging from the Bataclan windows.

Support UCCR, help us to give reasons for the faith that we have »