Sexual abuses, report on priests in Pennsylvania: what the media are hiding 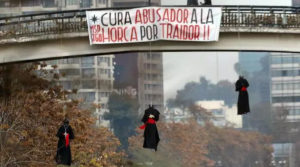 The topic of paedophilia inside the Catholic Church has once again become the main focus on attention, and it is important that Pope Francis has talked about “crimes” in the letter diffused yesterday, because the sexual abuse by these corrupt men is not only a sin, but a tragic betrayal of their vocation. Few days ago the report realised by the Grandy jury of Pennsylvania, which describes the abuse occurred from 1947 until today in six dioceses of the American State.

The news went around the world, but there are two details to add, which do not diminish at all the seriousness of these actions, but they permit to contextualise things better. Few have talked about it, not even the “Catho-traditionalist” media, which are exploiting this issue to spread hatred towards today’s Pontiff and his collaborators. Until yesterday, they were talking about a secularist plot; today they are «ready to ask for the resignations even only on the basis of “it is not possible that he did not know”, when some clergymen considered close to the Pontiff in charge end up in the crosshairs (only in theirs)» – wrote Andrea Tornielli. A battle not in favour of the victims but «pursued by self-styled Catholic websites that daily and violently attack Pope Francis, the Bishops (those they do not like), and their brothers in faith. [They are] ruthlessly accusatory towards someone but silently uphold other cardinals’ innocence still today in charge, maybe accused of more serious facts, but they do not ask for their resignation only because they are considered “conservative”».

1) ABUSES DATING BACK TO MORE THAN 20 YEARS AGO
If we read the entire report, we learn that we are dealing with sexual violences occurred more than twenty years ago, whilst there has been none since the United States Conference of Catholic Bishops committed to fight seriously this phenomenon. «The bulk of the discussion in this report» – writes the report: «concerns events that occurred before the early 2000’s […]. At the same time, we recognize that much has changed over the last fifteen years».

Even the case of ex Cardinal Theodore McCarrick, Archbishop Emeritus of Washington, dates back to abuses on adult seminarists many years ago. Of course, the authors add, there might also be more recent victims, but there are not enough certified data, and «we think it is too early to close the book on the Catholic Church sex scandal». Why, if the investigation concerns remote facts in the past, is it made to emerge today? There is who answers suggesting we should consider the political aspirations of the Attorney General of Pennsylvania Josh Shapiro, but it does not seem opportune to us to back conspiracy theories. Another remark: almost nobody has commented the fact that the main enemy to Pope Francis in the US, the Catholic conservative editorialist of  New York Times, Ross Douthat – idol of the little anti-Papist galaxy – candidly admitted having convered Card. McCarrick’s abuses. He had become aware of them in the first 2000s: «I was in the same position as the “everyone” who knew. And in that position you become accustomed to the idea that the story will never come out». And he did nothing to make it come out, despite collaborating with the most prestigious investigative newspapers.

2) WE ARE NOT DEALING WITH PAEDOPHILIA, BUT WITH HOMOSEXUAL PEDERASTY
The second detail is the one highlighted by Paul Sullins, Professor of Sociology at the Catholic University of America: «The current scandal includes mostly revelations about male on male sexual abuse of seminarians, where the victims are adults. These kinds of cases were not even considered in the responses to the 2002 scandal, which was about the criminal abuse of minors. The US Conference of Catholic Bishops commissioned two reports, one in 2004 and in 2011, by the John Jay College of Criminal Justice to study the reported cases of clerical sex abuse from 1950 through 2002 and 2010 respectively. Both reports found that over 80% of the victims were neither girls, nor pre-pubescent children (true pedophilia), but pre-teen and teenage boys». Sullins talks about “homosexual subculture”, confirmed by 44% of US priests in 2002.

Homosexuality is the big threat and challenge for seminaries, as show the worries and indication of Pope Francis: «If in doubt, better not let them enter». Even Card. Raymond Leo Burke talked about it: «There was a studied attempt to either overlook or to deny this. Now it seems clear in light of these recent terrible scandals that indeed there is a homosexual culture, not only among the clergy but even within the hierarchy». Robert Morlino, Bishop of Madison (Wisconsin), agreed on this: «We are talking about deviant sexual — almost exclusively homosexual — acts by clerics. Until recently the problems of the Church have been painted purely as problems of pedophilia — this despite clear evidence to the contrary. It is time to admit that there is a homosexual subculture within the hierarchy of the Catholic Church that is wreaking great devastation in the vineyard of the Lord. The Church’s teaching is clear that the homosexual inclination is not in itself sinful, but it is intrinsically disordered in a way that renders any man stably afflicted by it unfit to be a priest».

According to the American report, indeed, almost three quarters of the accused priests were homosexual, whilst only one quarter were heterosexuals. The majority of the victims, instead, were not children but young seminarists. It is therefore technically wrong to talk about “paedophilia”; at the most, we are dealing with “pederasty” (although this does not reduce the faults). In spite of this, Attorney Shapiro filled the stage with female victims to hold the TV press conference. Investigative journalist George Neumayr, present at the press conference which spread the news around the world, wrote: «The vibe yesterday at the Harrisburg press conference was very odd. Attorney General Josh Shapiro, an LGBT-backed Democrat, stacked the victims’ dais with female, not male, victims, even though most of the victims are male. I don’t think the composition of Shapiro’s dais was an accident. He does not want the public to see this scandal for what it largely is: a product of a very sick Gay Mafia in the Church that overlooks the homosexual pederasty of the Cardinal McCarricks». Shapiro’s playing down the prevalence of homosexual abuse might be a political calculation, probably aiming to avoid offending his innumerable Democratic gay sponsors.

« Luther and antisemitism: the floor to a Lutheran historian

Nobel Prize W.D. Phillips and that God present «in my life and in the Universe» »