The “forced Christianisation” of the Americas? Some historical clarifications. 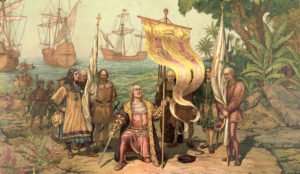 Some talk about the forced evangelisation of the Americas. This was done yesterday by historian Edmondo Lupieri in his Identità e conquista (Feltrinelli 2005). We read about “colonialism”, “Christian conquests”, and “imposition of Christianity”. What is true about that?

Things should be historically clarified, and we did so in our specific dossier dedicated to the topic: relating the Catholic religion to colonialism is a controversial operation. Beside the fact that many “Catholic” sovereigns – those of Spain, France, and Portugal – were such in quite nominal a way (whilst England, the Netherlands, and other countries had already adhered to the Reformation), the authorities of the Church were often elected and governed directly by the king and not by the Pontiffs.

The Popes, in any cases, already in 1435 (with the bull “Sicut Dudum” by Eugene IV), condemned the enslavement of indigenous people under threat of excommunication (here the in-depth analysis) and, since 1537 with the bull “Veritas Ipsa”, wiped out the appetites for slavery over the populations of the New World by proclaiming that “Indios veros homines esse”. A queen deemed historically a genuine Catholic was Isabella of Castile. Since 1493, some months after the discovery of America, Isabella asked Christopher Columbus that the Indios be treated “in a lovely way” (textual words present in the original document of 1501), by looking on them «as the other inhabitants of our kingdom». She would herself send back to the Antilles as free men the slaves that Columbus – dismissed by her – had sento to Europe to be sold.

Reflecting on the “imposition of Christianity” and on “forced conversions” committed by colonisers towards the indigenous people, we perceive a sense of great injustice. What happened to the culture of the won? We get things into the right perspective when reading one of the main scholars of Aztec and Mayan civilisations, Australian historian and anthropologist Inga Vivienne Clendinnen: the disappearance of the Aztec empire, she wrote, causes displeasure to her more or less like the defeat of the Nazis after World War II. Indeed, the Nazi extermination system was decisively softer than the innumerable weekly human sacrifices occurring in Tenochtitlán, Aztec capital. (I.V. Clendinnen, The Cost of Courage in Aztec Society: Essays on Mesoamerican Society and Culture, Cambridge University Press 2010). Clendinnen is amongst the first scholars of the Aztec and Mayan world and, several years after, she also published a book dedicated to the Shoah (awarded by the New York Times as the best book in 1999). It is therefore difficult to have a wider and more accurate perspective on this panorama.

The Australian anthropologist thus explained the only animal that was slain and publicly sacrificed was the human being, with the active participation of all the social classes: every in Tenochtitlan was built so as to celebrate the killing of the human being. «To shed blood everyday on the steps of the enormous temples, there was this obsessive anxiety not to let the world end, an anxiety that culminated every fifty-two years, when the threat of catastrophes became more concrete and imminent» (B. Diaz del Castillo, La conquista del Messico, Longanesi 1968). The film Apocalypto by Mel Gibson was accurate in the description of the two-century-long Aztec world. «People» – wrote Clendinnen: «were involved in the care and preparation of the victims and of their bodies: the dismemberment, the distribution of head and limbs, the division of flesh, blood, and the flayed skin». The whole Aztec, Inca, and Mayan culture was built around mass human sacrifice. «On occasion of fertility rituals» – added anthropologist George Clapp Vaillant: «women and children were killed in order to ensure the growth of plants. Sporadically there were also cases of ceremonial cannibalism. To inflict oneself bloody wounds was another way of ensuring the divine favour. People did horrible penitences by mutilating themselves with blades or by piercing their tongue with thorny twines» (G.C. Vaillanti, La civiltà Azteca, Einaudi 1962, p. 184-188). Recent is the news of the discovery of Tenochtitlan, capital of the Aztec empire: a huge cluster of skulls (among which many were women’s and children’s) offered to the Aztec god of the Sun, of war, and of human sacrifices, deposed inside a tower after the exposition to the public on a wooden structure.

This is what the the conquistadores found in front of their eyes. They managed to defeat the Aztecs by finding a prompt alliance with the indigenous populations victim of the cruel Aztec dominion (prisoners of war were the first to be flayed alive and sacrified to capricious Aztec gods). The instauration of Christianity also served to endow these men – totally subject to the whims of their cruel deities – with a more humane moral, so as to distance them from religious violence. The Aztec people, as has been indeed demonstrated, ceased to perform mass killings and other violent autochthonous forms of cult exactly thanks to the Christian conversion of many of them (Koschorke, A History of Christianity in Asia, Africa, and Latin America 2007, pp. 31–32; McManners, Oxford Illustrated History of Christianity 1990, p. 318).

Conquistador Hernán Cortés was greedy for money and riches and was heinous when combating the indigenous warriors, but also disgusted by their mass sacrifices, so as to feel, for this reason, a real liberator. Often the fury of war came to prevail, but let us consider that there were also monks and priests (like Bartolomé de Las Casas, protector of the Indios) opposing the non-rare violence of the same conquistadores. In Paraguay, the Jesuits loved and educated, the local populations and defeated the colonisers: the most classical examples is the famous Battle of Mbororè. The Jesuit missions were heavenly oases compared the Aztec dominion and that of the “white men”.

There is, however, no record of official requests of forced conversions. On the contrary, the first Council of America, the one of Lima in 1552, established: «We order that nobody baptise Indios beyond the age of 8, without verifying that he gets voluntarily baptised and out of love for what he asks for and receives, and that he understands the sacrament. Indian children below the age of reason or against the will of their parents or guardians shall not be baptised». It is also necessary to consider the statement by French historian Jean Dumont, amidst the most eminent expert of Spanish history between the XVIth and XVIIth Century: «There is enough of it to say that the evangelisation of the Indios was not forced and not even superficial, as has been often written, unfortunately. Entire and very important Indian peoples immediately embraced the Christian faith automatically […]. In Peru, the Christianisation of the Indios would be so deep that the great rebellion against the colonial power, the one of Topac Amaru at the end of the XVIIIth Century, will be led in the name of Christianity, in a complete overturning of the Indios’ religious references. In Mexico, from 1925 to 1930, it would be the Indios’ Catholicism that would oppose, with heroic resistance, the attempt of violent dechristianisation by the godless Jacobins and Bolsheviks».

Lights and shadows, as always. This is men’s history. But reality is more complex, and, when someone becomes (rightly) indignant about Western people submitting primitive civilisations, they should also recognise how the Christian values civilised violent people, dominated by blood and murders. Even today Bishops keep fighting on the side of the Indios, thus paying the consequences thereof. This happened some years ago to Brazilian Msgr. Pedro Casaldaliga, menaced of death because of his forty-year commitment in defence of the rights of the Xavante tribe.

« The ex ISIS executioner who found peace by converting to Christ