The ex ISIS executioner who found peace by converting to Christ 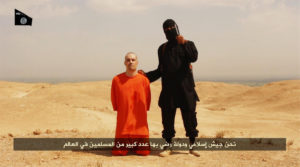 The conversion of Muslims. In Iran the path of the ex terrorist of ISIS, the jihadist group. But many are the stories of conversions from Islam, and many have to do with dreams.

Heart4Iran is an associations of Christians devoted to the evangelisation in Iran and in close contact with Muslims. They also run a TV channel, Mohabat TV, which deals with news and assists the Iranian Christian Church. Amongst one million daily viewers, though, there are also many Muslims.

Some months ago, a particular call arrived at the TV switchboard. Nazanin Baghestani, supervisor of Mohabat TV, recounted to have talked to a man who revealed to be one of the ISIS executioners, the jihadist terrorist group. He wanted to understand something more on Christ and reported to experience frequent nightmares and apprehension.

Nazanin met the man, whose name is kept secret, and a friendship, a dialogue, started out of it. «One night» – he said: «after we’d prayed and talked with him and read the word, he slept. And that night he said ‘that was the first night I could sleep in peace’». From what the supervisor of Mohabat TV reported, the ex executioner started a path of forgiveness towards himself, thereby finding peace and freedom in Christ, even in view of the immense evil he is always more conscious of having committed.

Although the man remains anonymous, there is no reason to doubt. It is certainly not an isolated case: many are the Muslims who oriented their path towards Christianity, despite the severe persecution and the daily difficulties lived in the Middle East. Very often Jesus reveals Himself to these men, fighters for the Islamic State, through dreams. Reports arrived in Italy, too, like the one of the conversion of Abu Hamza, Shari’a judge of the Islamic extremist army al-Fath, as well as member and founder of al Qaeda: «I am the son of a Muslim family» – recounted the ex jihadist in a video: «and I was born in Syria. Since my infancy, I had decided the follow the path of jihad for Islam». During his second arrest, while being in prison, he dream, however, of being in an empty church in front of a crucifix: «I was convinced that it was the work of the devil, tempting me». He was released and continued to perform his role of judge of the Caliphate during the Syrian revolution, but began to doubt Allah. Agnosticism led him to travel to Europe, to Austria and then to Germany, where he saw from outside a church on a hill, the same one which appeared in his “nightmares” during his prisony. He was in Hannover, and entered it by recognising it as such.

This phenomenon is not to be undervalued: even the New York Times dealt therewith recounting the story of Bashir Mohammad, ex fighter of Al Qaeda. Scandalised by death, he stopped when he saw Muslims kill Muslims. «As the couple began to consider leaving Islam» – we read: «Ms. Rashid said she dreamed of a biblical figure who used heavenly powers to divide the waters of the sea, which Mr. Mohammad interpreted as a sign of encouragement from Jesus».

Austrian Card. Christoph Schönborn assured to have personally baptised several converts from Islam, who «increased considerably in the Vienna archdiocese, the cardinal said and more than 50% of adult converts in the past two years had converted from Islam». There is also a study dated 2015 published on the Journal of Research on Interdisciplinary Religion, which confirms that, effectively, many conversions from Islam are taking place: Duane Alexander Miller and Patrick Johnstone, its authors, quantified them with an estimate of a little less than 10 million converts.

Dudley Woodbury studied the attraction of these Muslims to Christianity and discovered that they were fascinated by the Christians’ lifestyle, the love they showed in their relationships with non-Christians, and their treating women as equals. And, in addition, the credibility of the Bible: Muslims are taught that the Torah, the Psalms, and the Gospels come from God, but they have been corrupted. However, the new converts report that the truth of God discovered in Scriptures became for them a convincing key to their comprehension of God’s character.

« Vatican-China: “clandestine” Bishop Wei Fu: «we are joyful about the agreement»

The “forced Christianisation” of the Americas? Some historical clarifications. »