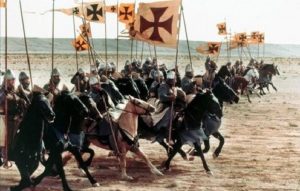 One of the big lie against Catholic Church concerts to Crusades. We look at what preceded: after birth of Islam (VII century A.D.), the area inhabitated by christian like Coast to Afric, Spain, Sicily and many town of Roman Empire in the Est, were attacked, looted and devastated by muslim, which wherever killed and enslaved. Any historic book describe speed of Mohammed and his heirs on estabilish themselves in Christians lands.

The Mediterranean was fully to Saracens pirates and it became impraticable, to the point where the historian Henri Pirenne assest that just with islamic expansion begins the Middle Age, because it was most traumatic compared to Barbarians invasions. «Christian can’t sail even with a raft», writed arab historian ibn Khaldun. Between 16th-century and 17th-century, Sicily was constantly ransaked. In 846 A.D. there was the first sacks of Rome: 3000 warriors raided the city and St. Peter and St. Paul church. Also many cities of the sea were regularly raided.

Famous rebirth of first Millenium there would never be if Maritime republics had not, firstly, regained the Mediterranean, cleaning to pirate and available it to trade and navigation. The historic study of Rinaldo Pennetta, called “Pirati e corsari turchi e barbareschi nel mare nostrum”, describe the hundred of islamic incursions on italian and european land.

In the Middle East, Jerusalem -town populated by christians and jews- was attacked to muslim in 638 A.D. Since then inhabitants were victims to abuse. «In 938 A.C. during the procession of Palm Sunday were killed many people and Holy Sepulchre was damaged with fire; during Pentecost in 966 A.D., the governor pushed muslim people against the patriarch (that was killed) and Sepulchre was raided; during the Caliph al-Hakim (966-1021) rule, occured a long persecution of Christians and Jews, ended with destruction of Sepulchre in 28 september 1009» (M. Meschini, “Il jihad & la crociata”, Ares).

In 1071 A.D., when Byzantine were by Turks in Manzikert, the West panicked and this pushed Pope Urban II to hold the first crusade. In fact, Orthodox risked to be destroyed and Islam, which already took the Spain, began to move towards Balkans and there was a risk that the christianity could be sorrounded. The academic René Grousset remember that Manzikert’s defeat convinced the europeans to «the West nacion were to take action». In fact, Turks took Nicaea and would soon Constantinople. Crusaded needed to postpone the fall of the town into Turks hands, saving Europe from inevitable assault.

«Towars to 1090», write historian Grousset, «turkey’s islam, after was driven Asia Minor’s byzantine, got ready to conquer Europe» (R. Grousset, La storia delle crociate, Piemme). After the fall of Constantinople in 1453, nothing stopped Turks, which invaded Balkans and arrived two times near Vienna. Intervention of Urban II was -according the historian- an act that was a defence war: defence of Byzantium, of Holy Sepulchre and christians land. Affirm Samir K. Samir in his book Cento domande sull’Islam (Marietti): «Christians or crusaders who fought the war didn’t think to act in the name of Gospel, but in the name of defence of christianity» and like «reaction to caliph al-akim bi-Amri Allah’s persecution against Syria and Egipt’s Christians». Jean Richard in his study called La grande storia delle crociate (Newton), note that crusades did not purpose to convert the islamists: «All the historians and theologians reject the idea that the “holy war” was a operation to obtain a forced conversion».

All this don’t affirmed by makeshift historian who appears in the television -like to italian know-it-all Corrado Augias-, but by leading scholar of crusades, like Arrigo Petacco with his L’ultima crociata. Quando gli ottomanni arrivarono alle porte dell’Europa (Mondadori). He affirmed that it’s impossibile analyse this part of our history besides to four century of muslim assault to Europe ad besides to islamic siege from West -begun with conquest to Spain and stopped by Francs in Poitiers in 732 A.D.- was about to begin also in the Est, precisley in the year to the first crusade, and would continue until 1683, when christians to the last crusade liberated Vienna of Turks.

Certainly it was a war and in many times -because of natural fragility of men- the will to defend christianity was blended with greed to new conquers. But it wasn’t nothing compared to events of 19th and 20th century: it wasn’t colonialism or export to democracy (like US wars in islamic land), because christians was restricted to «liberation of Holy Land. Nobody thought to remove Afric, Saudi or Persia from muslim» (G. Bordoove, Le crociate e il regno di Gerusalemme, Rusconi).

In conclusion, scholar Rodeny Stark, in his God’s Battalions: The Case for the Crusades (HarperOne 2009), dimostred other two interesting things. The first: crusades don’t birth for avidity of european noble, many of which underwent a «terrible economic crisis for go to Holy Land», even was the first try to european colonize. The second: crusades cannot be accused like «one of directly causes to actually middle eastern war», since until the end of XIX century were not interested in these events. In fact, «for many arab the crusades were only attacks against the hated Turks and therefore events of little interest»

« Support UCCR, help us to give reasons for the faith that we have

«If science exists, this means that there’s a Logic», famous physicist said »