Vatican-China: “clandestine” Bishop Wei Fu: «we are joyful about the agreement» 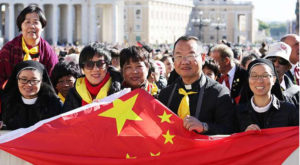 The historic agreement between China and the Vatican has been greeted with joy by the Chinese Catholics, by the clandestine Bishops, and by the missionaries who really know the situation. Let us listen to what they have to say.

Every action, every speech, and every decision of Pope Francis receives by now its preventive dose of malicious criticism by the notorious pseudo-Catholic bloggers who like to act, according to the situation, as theologians, diplomats, historians, or experts of international politics. This was the case with the historic agreement between the Holy See and the Chinese government of last September 22. But they overlooked its enthusiastic welcoming by the “clandestine” Chinese Catholics and the fact that this agreement had been longed for by John Paul II and Benedict XVI.

Someone talked about a “betrayal” of the clandestine Church, not recognised by the government, without checking, though, the judgment of the Catholic clandestines themselves. «If one criticises Pope Francis for having surrendered to the Chinese government on the appointment of Chinese bishops, he can do so only because he does not have faith and therefore cannot really know what the Church really is. And I would let such a person say whatever he wants: he can say whatever he likes; anyway, he does not know what he is talking about». This was the answer of Joseph Wei Fu, “clandestine” Bishop of the diocese of Boading, who lived several periods of detention and restriction of personal freedom («Personally» – he said: «it does not matter to me whether the government recognises me as bishop or not. Jesus was not recognised by the government of his day. And even the Apostles were not recognised as “Apostles” by the government of that time»).

Wei Fu is also indirectly addressing one of the few people entitled to make judgments about the case, the Emeritus Bishop of Hong Kong, Joseph Zen, who has always seen unfavourably this beginning of dialogue between the Holy See and the Chinese empire: this sufficed to make him become the new pupil of “anti-Bergoglians”, but, as written by Michael Sainsbury, «there are no other signs that Zen is more broadly opposed to the pope — he speaks publicly and privately with great respect and kindness toward him — he is quickly finding himself with perhaps unwanted supporters». Bishop Wei Fu, however, rejected the worries: «My trust grows with time; it is placed in the Holy Ghost, who guides the Church. With the signature of the agreement, there will no more be many worries and problems about how to ordain new bishops in the Church in China. The disunity of the Church may be overcome and become a fact of the past. The operations to put in difficulty and cast bad light on the Church will be less insidious. Naturally, it takes time in order to cure the wounds of disunity. But a factor which provoked and fed disunity does not exist anymore».

A realistic position, even though the details of the agreement have not been revealed to guarantee a necessary protection between the parties. It is a first, perfectible contract. However, something is always better than nothing, that is: if the “patriotic” bishops were previously appointed by the government without the necessary Papal authorisation – with the creation of a persecuted clandestine episcopate, faithful to Rome – now the Pope has acquired the right to nominate them, although he will have to choose from a list of names proposed by the ecclesial communities and the civil authorities. A great step forward. On its part, the Holy See has recognised the eight bishops illicitly nominated in the last years. Bishop Wei Fu speaks for many other “clandestine” Chinese brothers: «All the faithful and priests I know hoped for the improvement between China and the Vatican. Not only this: they prayed with perseverance for this. The signature of the agreement represents a considerable improvement. For this reason, everybody welcomes it with great joy».

Another authoritative voice is that of Father Antonio Sergianni, missionary of the Pontifical Institute for Foreign Missions in Taiwan and China for 24 years and very esteemed by Benedict XVI. Even he confirmed the enthusiastic welcoming of the agreement by many Chinese Catholics: «Yes, the agreement was welcomed by the joy of the faithful». We invite to read  his contribution in 2015 to know the situation in depth and understand that «on the still unresolved issue of the episcopal nominations it was Pope Benedict to hope apertis verbis for an agreement with the Chinese government». Indeed, in the Letter of 2007, the Pope Emeritus expressed the wish «that an agreement be reached with the Government to solve some issues concerning the choice of the candidates to the Episcopate» (n. 9). The continuity with Benedict XVI has been confirmed also by Father Federico Lombardi, ex spokesman of Ratzinger. The missionary in China commented: «It is an important agreement which will increase the atmosphere of trust, the reciprocal knowledge, the exchange of information, the circulation of bishops and certainly will make the Catholic Church grow. It is not a wave of magic wand which immediately solves all the problems, but it will make the Church grow in the long run. This signature is a link, a step: it is the link in a chain, in a process, which has then to develop little by little».

The goodness of the agreement was concretely manifested in an immediate way, since, for the first time, two Chinese bishops will be allowed to participate in the Synod of Youth. A clear debunking of the jinxes who cheered for the failure of the agreement (only in order to corroborate their obsession: blaming the hated Pontiff). Another authoritative voice having intervened is Francesco Sisci, the first foreigner admitted to the High School of the Chinese Academy of Social Sciences in Beijing, ex director of the Italian Institute of culture of Beijing, and foreigner consultant of the most prestigious Chinese bimestrial periodical of politics and culture: «It is a moment for which the Chinese Church had been waiting long»s – he said. «The greatest part of the faithful, priests, and bishops had been dreaming for many years of coming fully back to feeling Chinese and Catholics, together. It will not be the end of the problems. Old grudges and rancours have been tolerated too long. But finally in the Church the divisions are over». In addition, for the first time in China, there is «the admission of a principle of division between politics and religion. The Chinese Communist Party admitted not having religious authority, and the Holy See said not to have political authority. The agreement starts covering the grey zones in a way respectful of each one’s competences».

Another authoritative, albeit critical, voice is that Bernardo Cervellera, missionary of the Pontifical Institute for Foreign Missions and Asia News. He posed himself in the middle between optimists and pessimists by looking at «the pros and cons present in this fragile and “temporary” agreement». Even Peter Lin Jiashan is clandestine Catholic bishop, imprisoned for having been ordained without the permission of the political apparatus. Still – as revealed by Gianni Valente – he thanks God for the agreement between China and the Vatican and prays that it may become «a new milestone for the unity of the whole Chinese Catholic Church». The same is stated by Bishop Joseph Xu Honggen: the agreement between China and the Vatican will be able to «produce a “win-win” result, with a gain on both sides». And many others agree.

Therefore, listening to the people who are sufficiently informed about the Chinese situation and are the only ones entitled to make contextualised comments, we can see it is evident that a positive and long-awaited judgment on the agreement between the Vatican and China, strongly wished by the predecessors of Francis. Even if one considers the obvious perfectibility of this first agreement, optimism wins over pessimism, at least for who believes that history is guided by the Holy Ghost. A little detail which conservative bloggers have forgotten by now, siding with anticlericals of the worst order.

A comment to Vatican-China: “clandestine” Bishop Wei Fu: «we are joyful about the agreement»

« The Galileo case: the philosopher of science Feyerabend defended the position of the Church

The ex ISIS executioner who found peace by converting to Christ »