Nobel Prize W.D. Phillips and that God present «in my life and in the Universe» 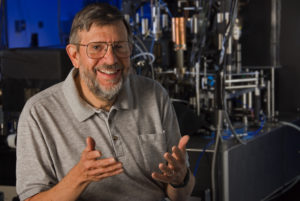 The US physicist and Nobel Prize William D. Phillips is called “the man who freezed atoms”, as he developed some important methods to cool atoms with laser light, to slow down their movement and be able to study them. He is Professor of Physics at the Maryland University and member of the National Institute of Standards and Technology (NIST). He never hid his faith: he is a Methodist Christian with a great esteem for the Catholic Church, as well as, besides, a member of the Pontifical Academy of Sciences.

«I do not thing there is anything strange» – he explained few days ago. «Many scientists I know believe in God. I do not think there is what is called the “conflict between science and religion”; maybe, at the most, some people are devoted to creating conflicts».

He refers to his “new atheist” colleagues, already singled out by his fellow mathematician Amir Aczel, from the University of Massachusetts: they «compromised the integrity of science» to try to demonstrate that «the idea of the necessity of God must be necessarily wrong» (A. Aczel, Perché la scienza non nega Dio, Raffaele Cortina Editore 2015, p. 14). Aczel decided to enter into the debate precisely in response to Dawkins, Harris, and Hitchens’s “scientific atheism”, in vogue until few years ago. Nobel Prize Phillips, on the contrary, has always declared himself a believer.

Harkening back to the alleged conflict between science and faith, the American physicist observed that «for the Bible, the Earth has an age of some thousands of years, which is very little. This, which seems a conflict, is in fact very easy to solve. The Bible is not a book on the scientific origins of the Universe, but on our relationship with God and on the relationship we want among ourselves. In my opinion, the Bible is not worried about details such as when the Earth was created, but rather about why it was created and what God expects of his creation. This is the message of the Bible, and I do not see any conflict with the message transmitted by science». A so-called “Nobel Prize-worthy answer”, indeed! The literal interpretation of the Old Testament betrays the latter’s original goal.

Phillips has the demanding task to convince the Protestant Christian world to abandon Biblical literalism and to stop opposing biological evolution. To do it, he takes Catholics as an example: «I am a member of the Pontifical Academy for Sciences, and both today’s and the previous Pope talked about it very clearly: The Catholic Church has nothing against the theory of evolution», and this position is not at all «in contradiction with the Bible». Going more into detail, he said about himself: «I believe that God is the creator of all what we see. This is easy to believe because there are so incredible a logic and an order, that it is possible to believe that the Universe came out of nothing. Of course, there are no proofs, obviously. This is a matter of faith. And I have it». But his’ is not a detached deism: «In reality, God is much more than this. I think that God cares about me, you, and all of us in a personal way. This is much more than saying that God is a Creator. Even Einstein believed in a God of this kind: he always said explicitly that he did not believe in a personal God, but, when he talked about it, he did it in a very personal way, as if he were some kind of friend».

Concerning this, we recall our recent dossier on Albert Einstein’s religious path.

« Sexual abuses, report on priests in Pennsylvania: what the media are hiding

Gay suicides? Nothing to do with homophobia; relationships are the cause »