«If science exists, this means that there’s a Logic», famous physicist said 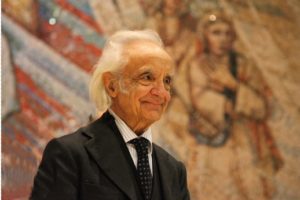 The recent reflection of famous italian physicist Antonino Zichichi is very interesting. For a long time, the exponents of the anticlerical world have questioned his scientific authority because he often affirmed to believe in God thanks to science.

However, still today Zichichi appears to have a H-index (index of impact on the scientific world) equal to 62, like Stephen Hawking (62), and much superior, for example, to Carlo Rovelli (52) and to Nobel Prize Sheldon Lee Glashow (52).

«The scientific discoveries are the proof that we are not the result of chaos, but of a strict logic. If there is a Logic, there must be an Author», wrote Zichichi, Professor Emeritus of Physics at the University of Bologna, ex President of the National Institute for Nuclear Physics (1977-1982) and of the European Physical Society (1978), and Enrico Fermi Prize winner for his discovery of the first example of nuclear antimatter.

The scientist also denied that science can explain or reproduce the miracles, which would be equivalent to «deluding oneself into thinking of being able to discover the scientific existence of God». This is impossible because, «if it were science to find him out, God could be made only of science and nothing more. If it were the mathematics to elaborate the “God theorem”, the Creator of the World could be made only of mathematics and nothing more. This would not be much. We, believers, want God to be everything, not only part of the whole». In other words, if God could be investigated by science (the famous “scientific proof” requested by anti-theists), He wouldn’t be the Creator, but just a creature.

Zichichi has always described two realities of existence: the trascendent and the immanent. The latter, he said, is studied by the scientific discoveries, while the former lies within the competence of theology. «Demanding that the trascendent area be studied in our laboratories is a mistake. If the two logics were the same miracles could not exist, but only scientific discoveries. Were it so, the Immanent and the Trascendent would be the same thing. This is what those who deny the existence of the Trascendent claim, as does the atheist culture. It is not an irrelevant detail. Miracles are the proof that our existence is not limited to the Immanent, but there is more».

But the Author of what the science finds out, continued the eminent Italian physicist, «is an intelligence far beyond ours. That is why the great discoveries came not out of the improvement of calculations and measures, but from the “totally unexpected”. The greatest miracle, Eugene Wigner (a science giant) liked saying, is that science exists».

Zichichi’s words clearly recall the reflections of Albert Einstein, who wrote: «You find it strange that I consider the comprehensibility of the world as a miracle or as an eternal mystery. Well, a priori one should expect a chaotic world which cannot be grasped by the mind in any way. One could (yes one should) expect the world to be subjected to law only to the extent that we order it through our intelligence. Ordering of this kind would be like the alphabetical ordering of the words of a language. By contrast, the kind of order created by Newton’s theory of gravitation, for instance, is wholly different. Even if the axioms of the theory are proposed by man, the success of such a project presupposes a high degree of ordering of the objective world, and this could not be expected a priori. That is the “miracle” which is being constantly reinforced as our knowledge expands. There lies the weakness of positivists and professional atheists who are elated because they feel that they have not only successfully rid the world of gods but “bared the miracles”» (A. Einstein, On the Rational Order of the World: a Letter to Maurice Solovine, March 30, 1952).

Also the only Italian living Nobel Prize winner, physicist Carlo Rubbia, wondered about “why” science is so effective: «If we count the galaxies of the world or we show existence of elementary particles, in an analogous way we probably cannot have evidence for God. But, as a research scientist, I am deeply impressed by the order and the beauty that I find in the cosmos, as well as inside the material things. And as an observer of nature, I cannot help thinking that a greater order exists. The idea that all this is the result of randomness or purely statistical diversity is for me completely unacceptable. There is an Intelligence at a higher level, beyond the existence of the universe itself» (C. Rubbia, Neue Zürcher Zeitung, märz 1993).

A comment to «If science exists, this means that there’s a Logic», famous physicist said

Abortion doctor admits: «I have chosen this job to give birth, not to kill children» »