Thousands of adults will be baptized as Catholics at Easter 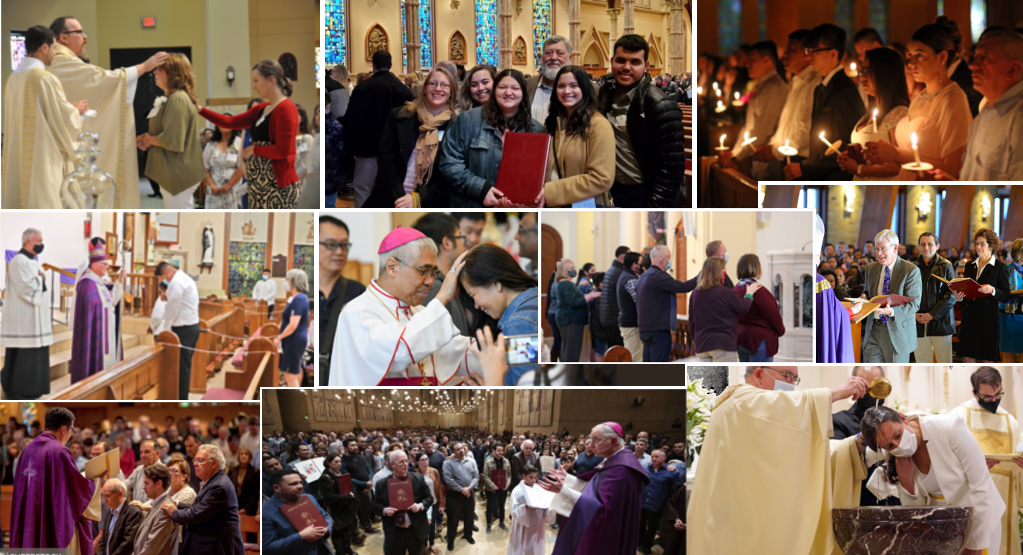 Also this year, during the Easter Vigil, thousands of adults will be baptized all over the world determined to belong to the Catholic Church. An important moment for their life following the conversion and the joy of the Christian encounter.

It has been centuries since Voltaire stated that Christianity would soon fade.

Not only were they wrong, but the Christian people seem to enjoy good health , albeit perhaps in the form of a smaller but more aware Church.

This increased awareness is demonstrated by thousands of adults who again this year (as in the previous years ) have asked to be welcomed into the Catholic Church .

US parishes are the most “technological” and present on the web, so much of the data we tracked comes from there.

New catechumens in the world, starting from the West.

n Kentucky , for example, Archbishop Joseph E. Kurz, presiding over the annual Rite of Election, preached to more than 300 people , between catechumens at the end of the path that will lead them to baptism and various candidates (people validly baptized outside the Catholic Church).

Similarly, in Boston more than 200 catechumens took part in the Rite of Election, expressing their desire to be baptized. A Rochester (in the state of New York) are preparing for baptism over 100 candidates and adult catechumens while future adult Catholics are 574 in the only city of Detroit (Michigan).

In New York , in a single archdiocese (that of St. Patrick), 220 catechumens (13 of whom are very young, aged 7 to 13) will become Catholics, to whom he addressed recently card. Timothy Dolan thanking them «for the inspiration you give me» and welcoming them.

Also in the United States, in Texas , during the Easter vigil on April 16, 1.652 adults from the parishes of the archdiocese of Galveston-Houston will become Catholics. About 245 of them are very young candidates or catechumens.

In Tennessee , over 100 adults from 25 diocesan churches are preparing for baptism while in the city of South Bend (Indiana) alone, 174 adults will be baptized during the Easter Mass.

In the city of Miami (Florida) alone, Archbishop Thomas Wenski has recently completed the approach to baptism for over 350 adults and, also in Florida, the diocese of Venice is ready to welcome over 400 adults. At Arlington, Virginia, there will be 149 catechumens who will be baptized at Easter.

A small record for Portland (the capital of Oregon), where 80 adult catechumens will publicly express their wish for baptism to the bishop, the highest number since 2008.

If we move to France , it will be 65 adults (35 adolescents and 30 adults) who will receive Catholic baptism in the St-Pierre cathedral of the city of Rennes. In the municipality of Auray (Morbihan), on the other hand, 42 adult catechumens will be welcomed.

In the French capital, Paris, the apostolic administrator Georges Pontier will administer baptism to 351 adults aged between 18 and 81.

Over 200 baptismal candidates are reported in Austria , a sharp increase compared to last year.

Although this is a lower figure, it is nevertheless encouraging that the baptism of another 12 adults for the next Easter Vigil is also expected in Malta .

These are just some but significant examples which can however give an idea of how many thousands of people around the world have taken the event of Christ and ask to formalize the embrace of the Church.

An interesting fact is also the age of catechumens and candidates: most of them, at least in the United States, are between 18 and 40 years , given surprising in light of the number of young people who leave the Church.

The reasons for these “bucking” accessions are summarized by the card . O ’Malley :” By inscribing your names in the Book of the Chosen, you are saying that you aspire to live a life of friendship with the Lord. “Holy” simply means friend of the Lord. What a beautiful description of the meaning of holiness. Baptism makes us friends of God ».

All men are called to this friendship (cf. Mt 28,19 and 1Tm 2,4), although giving one’s unconditional yes to Christ can be difficult.

One such catechumens, Beth Vetter , from Kentucky urges anyone who wishes to be welcomed into the Church to follow this call, however difficult it may seem: “ Do not be frightened by the path of initiation. It is a process, but still a path of personal conversion».

From all these experiences there is certainly much to learn , even for those already baptized.

As explained by card. O’Malley, the conversion “ does not end with our baptism. As Catholics, we believe that conversion is our life’s work . Our earthly pilgrimage must always be experienced as a continuous orientation towards God and therefore as a continuous distancing from sin ».

It is therefore a radical call , which challenges man today as yesterday and of which many catechumens remind us this year as well with their yes.

Cologne “removes” the cathedral, the last folly of cancel culture »