Mary of Nazareth, the twelfth greatest woman in history? A foolish ranking. 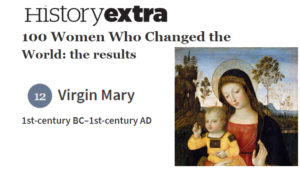 Some “experts” in 10 different fields of human activities nominated 10 women each who, according to them, would have had the greatest impact of world history. The initiative was taken by the review BBC History. The first woman was Marie Curie, famous scientist who discovered – amongst the other things – radioactivity, crucial to cure cancer. At the twelfth place, surprisingly, another Mary. The mother of Christ.

A bitter surprise, not so much because Mary of Nazareth was not ranked first, but because she should have been the last. Indeed, her place was out of the ranking. In fact, no comparison is possible between the Virgin and Marie Curie, or any scientist, politician, princess, philosopher. Mary did not invent anything, but no woman has ever introduced into the world what happened through her. With her yes (“fiat”) she allowed the divine to meet the human, the infinite to reach the finite, thereby opening to men a horizon of sense and eternal life. What is the point of perfect bodily health – thanks to medical innovations – if life is then full of an absence? What is the point of recovering from a disease if reality and all what we have built or is dearest to us – sooner or later – fades into nothing, shatters in the ephemeral, as if it had never existed?

Of course, if there had been dozens of Marie Curie, the world would be undoubtedly better. The point is that we are dealing with radically different levels, and such comparison should be totally avoided. No recovery from cancer would give man one millimeter of freedom in the face of the eternal Nothing; life will not be saved if it saved from the disease. The physical recovery does not deliver us from the condemnation of space and time and does not add any eternal value to that life which dramatically remains a breath, between the parentheses of “I was not” and of “I shall not be”.

«Without her “yes”, without her mediation, if the Virgin had not been there, we would not be saved. Therefore, we are full of gratitude and call her “Mother”, rightly; for what would be the good of our mother having given birth to us, if another mother had not ensured us the right, good, and happy destiny?» (Luigi Giussani, Maria: fede e fedeltà, 7 maggio 1989). With respect to infinity, our life is but an instant, the blink of an eye. All things are nothing. Unless Someone saves them and make them eternal. Unless the Eternal reveals and does not enter history. This is Christianity.

And it is precisely here that what was allowed by that young maiden of Nazareth. «My soul doth magnify the Lord, and my spirit hath rejoiced in God my Saviour. For he hath regarded the lowliness of his handmaiden. For behold, from henceforth all generations shall call me blessed» – says the Magnificat, the canticle of Mary after the announcement that she would become the mother of God Most High. It is not pride, but realism: there is no name of woman which is greater than hers. Indeed, the whole world, the whole history has been divided – also as for the number of years – by a child who had to be born of her. In other words, the mediatrix between the misery of man and the power of the Mystery, Jesus.

What we have just said is a Christian reflection which may be legitimately not shared by who is not Christian. But, a fortiori, from his point view, the Virgin should be simply a deluded woman, mother of the greatest deceiver of history, the one who claimed to be “the Way, the Truth, and the Life”. Thus, also from the viewpoint of a non-believer, we do not understand how Mary of Nazareth might be included in this ranking of worthy women, placed, though, on a somewhat less worthy step of the podium compared to many others.

In the same way, concerning the innumerable anticlericals who never get tired of quoting and admiring Jesus Christ, we reflected: all fine, for Haven’s sake. This is very welcome! But how can one be fascinated and amazed by Jesus without believing in his divinity, without taking into consideration what he claimed to be? Someone who describes himself as the Son of God is either the greatest impostor in history or says the truth. «In the problem concerning Jesus, we find ourselves between two hypotheses: either he is really a divine man or a madman. In the “Jesus” problem we arrive to a point at which we have to decide: between zero and infinity» (J. Guitton, Ogni giorno che Dio manda in terra Mondadori 1997, pag.159).

Here it is: for Mary, it is the same. Either she is the humble mother of God or she was an impostress. Either she is outside the BBC History ranking as a result of the immense disproportion compared to the contribution of any other man or woman, or she is outside the ranking because she gave birth to the greatest lie in history (cf. Nietzsche). Christianity, indeed. Either zero or infinity; the twelfth place is not admissible.

« Roger Penrose on consciousness: «Its comprehension is beyond physics»