A.R. Wallace discovered biological evolution: «It is guided by a Mind» 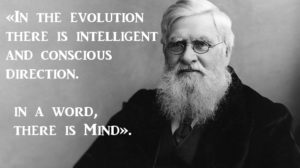 The book Nature’s Prophet (University Alabama Press 2018), dedicated to Alfred Russel Wallace, was published some days ago. The author, Michael A. Flannery, science historian at the University of Alabama di Birmingham has held that Wallace’s formulation of biological evolution was totally incompatible with Darwin’s. Indeed, his theory developed in a theological context. A theistic evolution, we may say.

Flannery, member of the controversial movement Intelligent design, suggested that this very theological opening was fatal for him from the viewpoint of fame, which was gained almost exclusively by his competitor Charles Darwin, co-discoverer of natural selection. This cannot be excluded, although it must be remembered that many of the first Darwinists were theists and Christians, existentially much closer to Wallace than to agnostic Darwin. Let us think of Asa Gray, Lyell, Herschel, Henslow, Mivart, De Filippi, Chambers, Rosa, De Nouy, Sinnott, and Marcozzi.

Entomologist George Beccaloni, who in 2013 curated an exhibition on Wallace at the Natural History Museum, explained: «Wallace was the one who had the paper ready for publication, and if he’d sent it directly to a journal, it would have been published and natural selection would have been Wallace’s discovery». Instead, the naturalist chose to send his work to his colleague Darwin, without being aware that even the latter was parallelly working on the same intuition. Not very honest operations followed towards Wallace on the part of Darwin and two colleagues of his’, Sir Charles Lyell and Joseph Hooker, so much so that Beccaloni defines these actions as «pretty morally reprehensible».

In this case, history marginalised him more compared to Darwin, and we agree with physicist Gerald L. Schroeder, who confided to UCCR that it would be right to celebrate also a  Wallace Day, maybe by reminding that he never wanted to embrace reductionism or scientism and always held the superiority of spirit over matter. He believed in a transcendent God and in nature’s finalism, by saying:

«An honest and unswerving scrutiny of nature forces upon the mind this certain truth, that at some period of the earth’s history there was an act of creation, a giving to the earth of something which before it had not possessed; and from that gift, the gift of life, has come the infinite and wonderful population of living forms. Then, as you know, I hold that there was a subsequent act of creation, a giving to man, when he had emerged from his ape-like ancestry, of a spirit or soul. Nothing in evolution can account for the soul of man. The difference between man and the other animals is unbridgeable. Mathematics is alone sufficient to prove in man the possession of a faculty unexistent in other creatures. Then you have music and the artistic faculty. No, the soul was a separate creation».

«As a man who studies his surroundings to see where he is. And the conclusion I reach in my book is this: That everywhere, not here and there, but everywhere, and in the very smallest operations of nature to which human observation has penetrated, there is Purpose and a continual Guidance and Control […]. It may not be possible for us to say how the guidance is exercised, and by exactly what powers; but for those who have eyes to see and minds accustomed to reflect, […] there is intelligent and conscious direction; in a word, there is Mind»