Roger Penrose on consciousness: «Its comprehension is beyond physics» 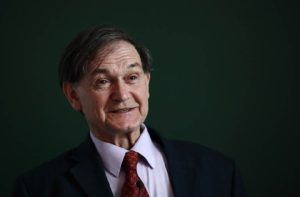 Whilst determinist biologist E.O. Wilson believes that – sooner or later – will discover the physical basis of consciousness, others seem more realistic and admit that «there are things that cannot be proved». We refer to the famous mathematician Roger Penrose, Emeritus Professor at the Oxford University and winner of the Wolf-Prize together with his friend and collaborator Stephen Hawking.

The expression AI (Artificial Intelligence) is often used to define advanced computers or programmes playing chess. For example, it is known that a certain chess position causes problems to computers: «it is a famous position of draw known to any player mastering the rudiments of the game of chess; instead, Fritz, the main chess programme, set on the Grandmaster level, completely misunderstands the position and, after a certain number of moves, it makes a stupid mistake and loses the game. I am not a good player at all» – explained Penrose: «but I have a certain understanding of what pieces can do and cannot do. Fritz, instead, does not understand anything, not even what the pieces of chess can do. Simply, it follows in an unconcious way some specific algorithms, without understanding what it is doing».

Penrose’s attack is directed at determinism and materialism, still dominating the scientific environment and, in particular, neurosciences and believing to be able to reproduce human thought in a computer: «I have my reasons not to believe in this. Some actions of the human thought may be certainly be simulated computationally. For example, the sum of two numbers or even more complex arithmetic and algebraic operations. But human thought goes beyond these things when it becomes important to understand the meaning of that in which we are involved».

On another occasion, again Penrose said: «Whatever my conscious mind does, it is not something that can be put into a computer: it acts differently from the computational one». The stumbling block of determinism has always been awareness, and not even quantum theory «as we understand it today can explain it». Paul Dirac himself, one of the fathers of quantum physics, «admitted it: quantum mechanics is not the last word. There is something else, which eludes us». Any computer or robot is programmed by a human mind and will be able to do calculations, but without being aware of doing them: «in order for them to work, there must be earlier on the conscious comprehension by the programmers who design them».

The famous physicist of Oxford understood that it is not possible to reduce man to a purely physical object. It is true: the substratum is chemical and biological, including the brain’s, but «I say we need go beyond that». In 2004 Penrose proposed a vision of the universe composed of three independently existing worlds: mathematics, the material world, and human consciousness. For him, it was a total enigma how these interacted between themselves beyond the capacity of any scientific model: how can atoms and physical molecules, for example, create something that exists in a separate domain that has no physical existence, like human consciousness? The latter is not physically measurable, but still mysteriously guides the actions of our physical bodies. As written by biologist Fiorenzo Facchini, Emeritus Professor of the University of Bologna, «the cognitive capacities of man are characterised by abstractive intelligence and by freedom and are rooted in the biological basis, but they go beyond, in the sense that they develop in a different sphere, an extrabiological one, which may be more correctly defined as spiritual» (F. Facchini, Evoluzione. Cinque questioni nel dibattito attuale, Jaca Book 2012, p. 11).

Admitting not being able to reconcile his scientific materialism with the existence of a non-physical world like human consciousness, the famous atheist philosopher Daniel Dennett went so far as to deny even the existence of consciousness. In 2012, instead, philosopher Thomas Nagel denied, instead, his own materialism by recognising the “irreducible” and scientifically inexplicable nature of human consciousness: «We should completely foresake scientific materialism, incapable of offering a complete basis to understand the world of human existence» (T. Nagel, Mente e cosmo. Perché la concezione neodarwiniana della natura è quasi certamente falsa, Cortina Editore 2015).

Thus, consciousness remains a mystery or, to quote secular philosopher Colin McGinn, is a “miracle”. «We do not know how consciousness may have arisen from the natural processes of the previously existing material things. We are tempted, even though with reluctance, to bring up divine assistance: only some kind of miracle could have drawn this from that. A supernatural magician would be needed to draw consciousness from matter. Consciousness seems to introduce a clear break in the natural order and is the point at which scientific naturalism fails» (C. McGinn, The Problem of Consciousness, Basil Blackwell 1991, p. 45).

« What do sceptical scholars think about appearances of Jesus?

Mary of Nazareth, the twelfth greatest woman in history? A foolish ranking. »