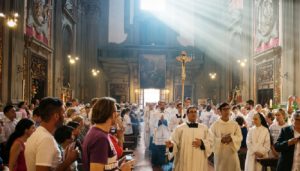 Another time, Blaise Pascal won his wager. The mathematician, indeed, dared to make a provoking reflection: who believes in God always wins, because, if God exists, he will obtain salvation. If he is wrong, he will have lived anyway a more serene existence than who does not believe. «Religion and spirituality positively affect a person’s health and quality», wrote Christopher Ellison, from the UTSA Department of Sociology.

The recent US study, therefore, adds to the copious scientific literature on this topic, which we wanted to collect in a specific dossier of ours.

For the sake of completeness, we shall report the result of the most recent research: married couples attending Mass together live longer, have less probabilities of getting depressed, and have less probabilities of getting divorced, according to the Harvard School of Public Health. On the JAMA Psychiatry, instead, we read that the American women attending a religious celebration at least once (or more times) a week are five times less likely to commit suicide as compared to those who never go to Church. Finally, the analysis of findings from Britain’s national happiness suggested that Christians were amongst the happiest people in the country, whilst those did not identify with any particular religion obtained the lowest scores of satisfaction.

Chance? We do not think so. It is not irrelevant to have or not to have grasped the ultimate sense of life, to have or not to have met the Truth, namely that Jesus of Nazareth who has remained present and a companion to man through the faces of the Christian community. With God or without God, everything changes, also relatively to the person and the psychophysical well-being.

Even science philosopher Evandro Agazzi hinted at this, by writing: «Who believes in God, in a context also of reason and not of pure faith, may get this country: he can perfectly know, understand, and explain what also non-believers know and understand, and, additionally, he manages to understand certain dimensions of life and of man of which they do not think and which constitute the sense of life» (E. Agazzi, Quando Dio aiuta a capire, in Corriere della Sera, 23/06/85, p. 3).

« Msgr. Viganò condemned: he stole from his disabled brother while he scolded the Pope

A.R. Wallace discovered biological evolution: «It is guided by a Mind» »