The disappointment, not reason, pushes us away from God 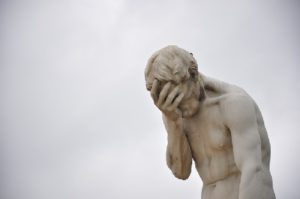 A recent series of studies, pubblished on the “Journal of Personality and Social Psychology”, has find out that the main the cause of atheism (or the religion faith’s desertion) strong>is not based on rational justifications, as some people like to suggest, but mainly on an “anger against God”. It’s an emotional atheism the one lived by millions of people, more on the mouth than in the heart.

At first sight it may seem paradoxical: how can people gets angry against God, if they don’t believe in God? Indeed their belief, in the majority of cases, it’s dictated by a negative feeling, by a loss of faith instead of a mature and rational awareness . The anger against God grows like consequence of unpleasant situations that happen in life or, in extreme cases, of natural cataclysm or diseases. Or from delusions perceived for missed hopes, a bit like Judah feeled towards Jesus, disappointed because the Reign of God was still to come. In other words, the anger against God can not only bring people far away from God, but also gives them a reason to clutch at their incredulity.

«When instead people understand that God take care of them and has positive intentions, also if they can’t understand which are those intentions, people tend to dissipate this anger», asserted Julie Exline, a psychologist of the Case Western Reserve University. In fact the life of many nonbelievers and agnostics is often characterized by numerous judgment changes, depending on the feelings that they are experiencing in that moment of life.

So, how can we help our nonbelievers friends? We have talked many times about the connection between the existence of God and the existence of evil. It’s not only possible to don’t feel scandalized in front of the evil and don’t loose the faith, but, instead, that the existence of evil is a starting point to understand how only Christianity can give an adequate answer to what man experience and demand. But our main task is to heal men’s wounds, like often pope Francis said, because it’s this what he is talking about when he speak relating to the “injured humanity”. Through our presence, «the main thing is the announcement: “Jesus Christ saved you”», he has said in the famous interview to “La Civiltà Cattolica”. «Ministers of the Gospel have to be men able to warm people’s heart, to walk with them in the night, in the dark without getting lost». Only in this way we will be witnesses of our encounter with God.

A comment to The disappointment, not reason, pushes us away from God

« American Court: Chimpanzees may not be considered as human beings