Aldo Brandirali: from Marx to Christ… passing through Father Giussani 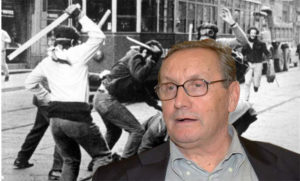 The Meeting for Friendship amongst Peoples, organised by Communion and Liberation, is about to start. Whatever one thinks, everybody should take interesti in the writings by Father Luigi Giussani. His reasonable way to explain faith does not leave indifferent, and his’ is a method of evangelisation that will never be anachronistic. It is so that he converted thousands of people, including Muslims, Orthodox Christians, Protestant theologians, agnostics, scientists, philosophers. But also several Marxists: one example is Aldo Brandirali.

Born in 1941, Brandirali was one of the points of reference for the 1968 Milanese activists, one of the exponents of the Italian Communist Party in 1945, and leader of the Maoist Union of Italian Communists (Marxists-Leninists), founder of the weekly magazine Servire il popolo [Serving the people] and the review FalceMartello [Hammer and Sickle]. At least until 1975, when, after he met Father Giussani and his 15-thousand-member party was disbanded, his path of personal conversion started.

«I had always been an influential interpreter» of the 1968 revolution, as Brandirali has recently written Brandirali. «If today I still had the opinions I had at that time, now I could only recount delusions and failures, and this would not be interesting. In fifty years I have walked, changing, recognising failures, and trying to explain my reasons to myself». It was an epoch full of «ideologies that invoked the primacy of theory over reality»; however, Brandirali saves the initial revolution of those young people, one of whose leaders was he and who were animated by «more human needs than enrichment and the myths of wealth and consumerism. Questions on the meaning of one’s own life arose as always happens in all generations. Questions on the sense [of life] that did not find an answer in the dominant morality, with a State conceived as a place of a consolidated ethics and a Church become against the current, with its religious ethics critical of the secularist one». The ethical State and a moralist Church. For this reason, «going against the current, breaking with the customs and traditions of that day, experiencing different forms of life: this becomes the youth’s subjectivity of those years».

Long hair, torn clothes, free drugs and sex, family conflicts, cultural contestation of teachers, anticlericalism, questioning authority in general. This also because «the sons did not receive adequate answers from the adults to their questions of meaning. There was not a meeting with a correspondence to one’s own desire of meaning» – writes the Italian ex Communist. But Bradirali also went out of the Italian Communist Party as «the Communist ideals remained outside the real life, because the goal of the political fight was only to be part of the ruling class of the Country», thereby giving birth to the Gruppo Falcemartello [Hammer and Sickle group]. And, nevertheless, there was again a failure by reason of the «decline of the initial questions, and with the rise of an abstract problem of political concreteness, which became an opening to the ideas of violent actions to impose our ideas. I refused to be involved in this logic, and I provoked the dissolution of the movement. It could be understood that we had not found the answers to our desire. A dissolution that concerned 15 thousand members and that caused much resentment towards me».

On October 1982, as we were saying, he met Father Giussani, founder of the ecclesial movement Communion and Liberation, which is trying to recuperate amongst the young people the credibility of Christianity as an answer to the expectations of meaning inherent in the human heart. It states the necessity to restart from the concrete encounter with Christ, Who can be met in the faces of the Catholic community, really to change life and, as a consequence, the whole world. «I was very surprised by his recognition of what I was, not of what I said» – writes Brandirali. «This new attraction grew inside me, and on May 1985 in a public meeting with Father Giussani I told him: “But where were you? I have always looked for you”; I meant that I had finally found in him the point of reference to understand my questions. Giussani himself answered that even he had looked for me, that is to say he knew about my youth unrest, of the questions characterising it, and he wanted to reach out to us beyond ideologies».

Aldo Brandirali so converted to Catholicism, thereby completely abandoning the Marxist-Maoist ideology. Today he saves its ideal but condemns its developments: «Having studied Marx in my youth and having then verified the theory that took the name of Marxism» –  he reflected: «after a long path that brought about a deep change of my ideas, I have become Catholic, and I have understood that there cannot be a science of the life of the peoples and persons». This because: «the desire of justice and equality among people represents a noble ideal, and going against the worldly mentality of enrichment as the goal of life is a step towards freedom, but all these human reasons need the true historical subject of history, which is not the self-emancipation of men, but the unity of men, having its root in Christ and in the capacity of following the truth by faith. Christ is the subject of history, a presence that continuously revolutionises the life of men, by recognising them and supporting them in their desire».

Father Luigi Giussani has been recently remembered by the Archbishop of Bologna, Matteo Zuppi, who recalled his «so personal, directive, and affectionate attitude, in love with God and therefore penetrating, sensitive, firm and flexible, attentive to man, which made others feel the longing for heaven and opened the most authentic questions of the heart, of the person. Giussani saw how the youth starved, in fact, for true words; they were desirous of water to quench their heart’s thirst; they were naked because, with many words deprived of a true content, they were prisoners of common places». And, one of these young people, was precisely ex Marxist Brandirali.

« Peter Singer, guru of secular bioethics: «Disabled? Ok to rape, they do not understand it

Luther and antisemitism: the floor to a Lutheran historian »