«The return of God? Inevitable: man has a call to transcendence in himself» 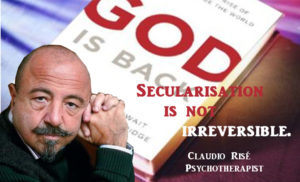 On religiousness today as well as on who has a say or not on religious symbols and rituals, there is great confusion in Italy, also owing to misinformation. The usual stereotype, repeated more times by the big media, is that religion and its symbols do not interest almost anyone anymore. We are explained, until we get bored, that the developed world deals with other things: money, fun, status… in sum, the things that matter. The rest is bigotry about to disappear.

That is the thesis of “secularisation”. The world has by now learnt to to without God and goes on, more or less serenely, on its own. This hypothesis has been by now proposed for 230 years, when the French Revolution had the holy statues hacked down to substitute them with that of the goddess Reason, and is now refuted, as we shall see, by internationally known and accepted data. So much so that the official philosopher of postmodernity, Jürgen Habermas, asked to talk about post-secularisation today […].

The human being needs something else, beside money and more or less shiny consumes. In particular, he needs to love and to be loved by Someone else who gives him something back from a higher and eternal dimension and whom all the world’s cultures call God, in different forms. Tirelessly looking for God and his strength is the providential aspect of the human psyche which has always been called in the West “soul” (without listening to which even the body does not feel very well). And man is looking for the soul Oprheus played with his flute throughout woods of Greece, not yet administered by the troika, but being already a testimony to the birth of poetry, of culture, and of beauty of this part of the world. Yes: it is in those areas that there are also our Biblical, Greek, and Christian roots, about which Benedict XVI wisely talked to us. Rediscovering them is good for us, although in the modest Charter of the European Union they completely go unmentioned (but it does not matter).

The return of God which put the word end to the secularisation did not immediately occur. It was already for a religious need that in the middle of the Sixties (well before 1968), thousands of young Western people left their busy parents’ homes for a higher research (without too much fear of the deep) through meditation, the research of oneself and that of the sacred. It was the epoch of the Second Vatican Council, and the interest of the Christian churches concerned the «horizontal truths», as theologian Jean Guitton called them: peace, rights, freedom, and science. Many of those young people intuited, though, that from none of those practical categories the real change of course would have ensued, for which they felt the need: the vertical axis of the Cross, the one directed upwards, was missing. They looked for it (usually without finding it) in the monasteries amongst the Himalayan peaks, in meditations, even in sometimes multi-coloured gurus; at least, they tried. As already recognised by historian Augusto del Noce, even the youth revolt was born later «by the recognition that opulent society leads to alienation to its highest degree» (L’epoca della secolarizzazione, edizioni Aragno) and by the attempt to override it.

The unsatisfied need was after some years reproposed with flaunted superficiality by the more versatile and its way deep publicity of the various churches. The trend setters, much more informed with their surveys than the Enlightenment theory of secularisation (taken seriously by some Christian churches, too), perfectly knew indeed that for a great many young people Jesus was more interesting than any other «brand» and that, after all, they would have really wanted to follow him. Thus, in the spring og 1973, they launched the Jesus jeans with the writing on the back: «Who loves me follow me». L’Osservatore Romano wrote an indignant commentary. Even Pier Paolo Pasolini seemed to fall into that with a «corsair writing» on the Corriere della Sera. In which, besides, he acutely announced that from that manifesto capitalism «provided men with a total and unique vision of life», from the body to consume and to God, and would not have known what to do with the Church anymore. Just as it more or less occurred. However, since, beyond the prophetic tones, PPP really was a little prophetic (like true poets), he also recognised that maybe this story talked to us about the future. Perhaps calling the trousers Jesus and printing «Who loves me follow me» on them, capitalism understood also that following Christ would have passed through that, through the satiety of consumerism, rather than through the speeches on rights and on science made by the Council. And PPP himself saw a punishment in this, the «nemesis of the Church as a result of her pact with the Devil»: materialist consumerism.

The fact remains that people went back to following God, and not only in the Christian world. In a few years, in Iran the Westernised regime of the Persian Shah was overturned by Ayatollah Khomeini, who substituted it with a theocratic State, still in power. In the USA, also amongst the young Christian libertarians, there was a spread of movements like the Promise keepers, who got married only after having made a public and solemn promise to keep the marital bond by renouncing the possibility of divorce and going so far as to obtain that in many Federal States this promise was officially registered. In sum, against the «we want all» they asked for bonds, to rebuild society. A process that still continues today in the world and also in all the West by continuously renewing the search for new ways of affirmation. Furthermore, the non-Western countries had demonstrated that secularisation was not indispensable for economic development and for modernisation, which occur at a very fast pace even in prevalently religious societies like India, or Singapore, where indeed religiousness was intensified with development. Believing in God did not mean at all remaining poor and hungry.

It was, nevertheless, after the fall of the Berlin Wall and of the Soviet Union that secularisation entered a crisis period in the whole world. The «return of God» was by now evident and recognised by religious sociology, by surveys conducted everywhere to verify it, and by political science. The phenomenon did please the majority of old politicians, accustomed since the beginning of the last Century to the hypothesis of a gradual and unrestrainable development of atheism. The return of God must not surprise us, though: the psychological observation shows in a precisely clear way (in Carl Gustav Jung, Edmund Husserl, Karl Jaspers, and many others), that man has a strong call to transcendence, which is expressed in his ideals, for example. When he does not listen to it (or is prevented from doing so), he suffers and becomes ill. Moreover, he needs a more significant and interesting belonging than the supermarket card, which helps him recognise his identity and the sense of his existence. Amongst these identity aspects, the religious is one of the strongest one and drags many others with itself. It is no chance that, for example, at the end of the Twentieth Century, when the previous nations incorporated into the ex Communist Yugoslavia were reconstituted after the last thrill of secularised globalisation, the main criterion to establish the boundaries was immediately that of religious belonging. As written by Marco Rizzi, on that occasion: «the religion of the majority determined the boundaries of the States» (La secolarizzazione debole, edizioni Il Mulino). Even in Europe, at the end of the last Century, nations and religious identities were already being reborn.

The post-Soviet Russia was the first to start soon to rediscover the religious and transcendent aspects of its own identity, together with its own history, its own boundaries, and its own symbols after 70 years of atheist Communism. In that Country, this enormously strengthened both religious participation and the Orthodox Christian Church and the State. China, with its managers of today, committed to the reproposal of the Taoist thought as well as of the moral and religious vision of Confucius and of its disciples. Not everyone was, though, happy about the end of secularisation. In the West, the most upset ones were, in effect, that had been administering the whole religious question since the epoch of «God’s death»: the State with its traditional parties, and the churches «biased in favour of secularism», as written by philosopher Marcello Pera in an interview on this newspaper (dated the 5th of April 2018). Today, if the majority of the interviewed by Pew research and many others serenely declare to believe in God and a great many assure that the feel strengthened by an intense personal relationship with the sacred, meditation, and prayer, it means that religion has by now come out of that secluded corner in which it was relegated by the agreements of the diplomacies between secularised states and ecclesiastical bureaucracies. This upsets, though, old habits, traditional indolences, and recent comforts. It is easier to make the Church work as an NPO instead of keeping up with a Holy Spirit that, as the Gospel of John says, «you cannot tell where it comes from or where it is going», but this is exactly what the faithful look for.

Often priests do not have, however, anymore a direct relationship either either with the langauges in which the Biblical and evangelical word was handed down, or with the ritual and mystical traditions that may make for one of their insecure interpretations. As many believers complain: they behave as social workers. This has, though, nothing to do with Christianity, where since the beginning Jesus admonished Judas, the administrator-traitor, who protested against the waste of the oil poured on His body before the Passion: «The poor you will always have with you, but you will not always have me» (Mark 14:1-11). Poverty and richness concern human freedom, but it is in the personal relationship with Christ that man’s destiny is at stake. As had intuited Jean Guitton, the «horizontal truths», peace, rights, and science, have weaned the ministers of faith from the effort to relate to the other difficult axis of the cross, the vertical one, with (for example) its looking upwards at the (personal and collective) future and, downwards and towards the deep, at the past and tradition. The extraordinary dynamism of Christianity has always consisted, instead, in reconciling the two directions, the horiziontal and the vertical one, in the middle of which there is man.

The re-awakening of faith as a diffused and popular sentiment has nothing necessarily divisive in itself. As have demonstrated the studies on war, contrary to what is often maintained, only less than 10% of conflicts has been provoked by religious motivations. Anyway, the fact remains that this rediscovered and demanding faith is more difficult to handle than opportunistic habits or superficial devotions. Especially in Christianity the return of God appeals, instead, to that non-conventional «creativity» recalled by Benedict XVI. Of course, universalist ideologies of 1700 and their omnipotent fantasies to substitute God and national traditions with a «goddess Reason» good for everyone have made their time. At the existential level, in lifestyles always more oriented towards the invasiveness of economy and technology, religious beliefs represent for always larger groups the possible alternatives to the depersonalising logic of the market and the dehumanising one of technology; starting from those for artificial reproduction.

At the anthropological level, ancient realities of people, territories, nations, and their cultures re-emerge; and so does their God, who can cohabit with everyone provided he is respected. Ours is the man-God dead on the cross. The only one to have resurrected

The Pope rewrites the Lord’s Prayer? The modification on “temptation” dates back to 2008 »