9600 Jews were protected at the Vatican 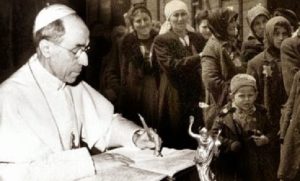 In 1943/44 thousands of Jews found protection thanks to the systematic committment of the Vatican. Until now the exact number was not known to all, but recently Johan Ickx, director of the Historical Archive of the Vatican Secretariat of State, has revealed it precisely.

Almost 5,000 Jews were hosted and hidden in Catholic monastries, 3,000 found refuge in the Papal residence of Castel Gandolfo, 1,460 in Catholic houses, 60 in extraterritorial Italian buildings and 40 directly at the Vatican. These figures emerged from the Vatican archives’ documents, explained Prof. Ickx in a recent conference called “Refugee Policies from 1933 until Today: Challenges and Responsibilities“.

The Vatican’s was a silent action; also Pope Francis talked about it: «Everything was pulled out on poor Pius XII. But we must remember that first he is seen as the great defender of Jews. He hid many in convents in Rome and in other Italian cities, as well as in the summer residence of Castel Gandolfo. There, in the Pope’s house, in his bedroom 42 children were born, the children of Jews and other persecuted refugees».

The French essayist Matthieu Baumier, in replay to accusations of anticlerical Michel Onfray, has rightly explained: «Between 1934 and 1937, 35% of the German Catholic priests underwent interrogations in the Gestapo seats. In Bavaria 150 Catholic schools were closed between January and April 1937. The persecutions and homicides well explain the caution of Cardinal Pacelli, who, once elected Pope, will soon learn not to put in danger the Catholic people with too strong or impulsive declarations. Pius XII had been a direct witness of the persecutions, and exactly for this he learnt the importance of discretion when it came down to save human beings who had to live in a totalitarian regime» (M. Baumier, Antitrattato di ateologia, Lindau 2006, pp. 203-208).

This was demostrated when the encyclical Mit brennender Sorge by Pius XI was published, on the 21st of March 1937. A public denunciation against nazism, purposefully written in German. The Gestapo forbade the diffusion of the text; the Hitler Youth «plundered many German bishops’ seats, priests were attacked, Rottenburg’s bishop was driven out of his diocese. Hitler prohibited the bishops to diffuse the encyclical, which was read as a political anti-Nazi act». Cardinal Pacelli was the main author of Mit brennender Sorge and he realised that the open denunciation of Nazism was a counterproductive initiative for Catholic and Jewish people.

There are many historians and religious Jewish scholars who admit all that. For example, Pinchas Lapide, former consul of Israel in Milan, has written: «The Catholic Church, under Pius XII’s pontificate, rescued from sure death 700,000 Jews. According to someone, even 860,000» (P. Lapide, Roma e gli ebrei, Mondadori 1967). The former conservative Rabbi of New York, David Dalin, now Professor of History and Political Science at the Ave Maria University in Florida, stated in his turn: «All those who survived the Holocaust testify that Pius XII has authentically and profoundly been a Righteous Man» (D. Dalin, La leggenda nera del Papa di Hitler, Piemme 2007). The Jew Gary Krupp, founder of the “Pave the Way Fondation”, has declared: «I grew up hating Pius XII, and then discovered that he was a hero».

A comment to 9600 Jews were protected at the Vatican