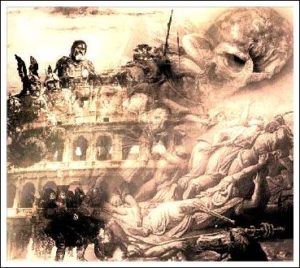 In this website section we speak about the Church history. We’ll try to demonstrate the reason that the man should be grateful to the christianity for its presence in human history.

In fact, there hasn’t ever been a better choice than divide the human history in “after” and “before” Christ. There hasn’t been a more appropriate judgment than that of secular philosopher and historical Benedetto Croce: “We can’t call us but christians”. You may be not a non-believer but you can’t not recognise that only in the Christian part of the world we found the origin of human civilty, of the concept of person, of valors and fundamental human rights, his uniqueness and inimitable quality.

Furthemore, we will face and we’ll answer all the historical issues that always secularism use for fight the Church and its presence in the world. As said the german historian Michael Hesemann, the anti-clericalism «exploited to traditional losers’s weapon: defamation. This trought counterfeiting, groteque alterations and horror stories. A group of authors are in race to show the Gospels like lies stories, the Popes like criminal power-hungry, the Church like oppression agency and Rome like bulwark intolerance» (Hesemann, Contro la Chiesa, San Paolo 2009, p. 5).

So, were built the famous black legends, which use the gruesome fables invented by firstly persecutors of christians, by Protestant reformer, by Enlightenment philosophers, by Masonry and by ideologues of modern dictatorships. Conspiracy theories dating from centuries ago, become delicious ingredients for modern bestseller with an designated area in many bookshops (often near to ufology area).

It is not our intention here to deny that have been committed in the past great injustice and terrible crimes also in the name of Church. But it always was a severe betrayal of Christ’s message. The great indignation in face of sins of the Church (contrary to other institutions), show that these crimes betray the magnitude of the christian’s message, which also channelled by people with little morality. In fact, also the men of the cloth -as all people- often wanted do good but did evil. This John Paul II wanted to underlin in the Jubilee 2000, when accompanied the Catholic Church trought an great act of contrition for all its historical blame.